The Premiere of “Home” 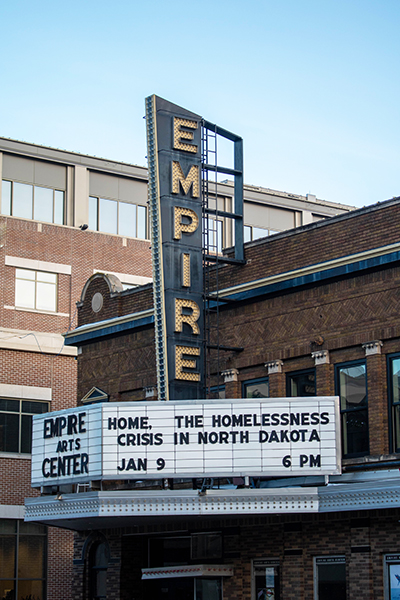 Imagine spending the day outside in the cold, windy weather and not having a warm place to go to rest your head at night.

This image you are creating is a reality among the homeless community not only in Grand Forks, but in North Dakota.

On Wednesday at the Empire Arts Center, The Human Family had a free premiere showing of the film “Home: The Homelessness Crisis in North Dakota”. After the film, a panel discussion was held to clarify and answer any questions that the audience had.

The Human Family is a fairly new non-profit organization that promotes human rights and social justice through film and art. This is the 3rd time this organization has been in Grand Forks but it will not be the last.

The film “Home” is a 12 part series that documents different stories of the homeless throughout the state. Each part is a new story that also covers different topics. Some of these topics include the rise of the cost of housing, homeless shelters, as well as addiction problems.

This particular film in the series seemed the raise the question of whether or not housing is a basic human right and began to promote ideas about how to house the homeless and what would need to be done in order to do so.

The panel consisted of 5 speakers who have a direct connection to the homeless. Jessica Thomasson was the moderator of the discussion. She is the CEO of the Lutheran Social Services in North Dakota and the Lutheran Social Services Housing Inc. Joining her on the stage was Pastor Lori Broschat who is a volunteer at the Lake Region Community center, Dr. George Connell who is a Professor of Philosophy at Concordia College, Sue Shirek who is the executive director of the Northlands Rescue Mission and Troy who as of Friday is no longer homeless.

Thomasson started the conversation with explaining that the panel had both lived and learned experiences.

She also talked about how 45% of households have money security which is money that would last them 3 months if something were to suddenly happen. That means that less than half of every household is financially secure.

“This could happen to you,” Thomasson said as she explained that homelessness can occur from a personal crisis such as losing your job.

“The people in the shelter are so gracious and grateful,” Broschat said when discussing her time spent volunteering in a homeless shelter.

Thomasson posed the question of why do people look down on people who are homeless.

All panel members seemed to explain that this behavior comes from fear. A fear of knowing that homelessness could possibly happen to you.

“If everyone worked together and helped their neighbor, life would be grand,” Troy said.

The panel expressed the importance of sitting down and having a conversation with people who are part of the homeless community. Getting to know someone will help find similarities and essentially put a human face on the phenomenon.

“Knowing that we are all more similar than different helps,” Shirek said.

When asked who should see this, each member replied with “everyone.”

Overall, the panel left the audience with the message to take care of each other.

“Home: The homelessness crisis in North Dakota” will be available to view later on in the year on The Human Family website.

If you would like to know more about what you can do to help, reach out to Northlands Rescue Mission which is the local homeless shelter. They can be reached on the phone at 701-772-6600 or on their website at www.northlandsrescuemission.org.