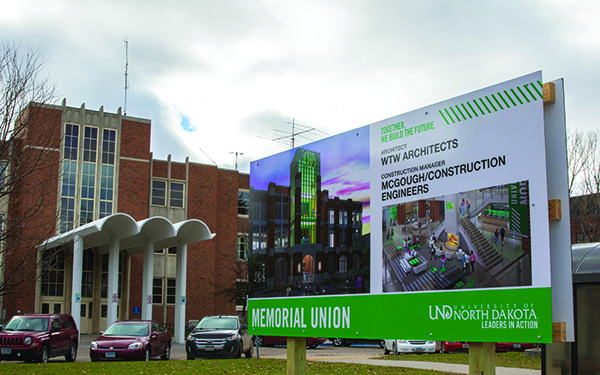 On November 20, 2018 UND students will have the opportunity to vote yes or no on a fee to build a new Memorial Union. If students vote yes, an amount of $14 per credit would increase by two percent each year and be paid by enrolled students at the beginning of the spring semester of 2020 through the fall semester of 2059. If students are in favor of the fee, a new 158,000 square-foot Memorial Union would be built.

What this means is expanded study and meeting spaces, improved dining, multiple retail space and entertainment areas and accessible entrances. If the fee is approved, the new Union would open in spring 2021, but if students vote no then the Union would not be renovated but continue to have safety and accessibility compliance issues, building condition challenges, technology deficiencies, inefficient energy systems and outdated mechanical systems.

”I don’t think it’s fair that current students have to vote, we won’t even have a chance to use it,” Hosler said. “We should be grandfathered into our tuition and fees from the year we start. UMD and SDSU do that so it doesn’t upset current students.”

To catch up with maintenance and repairs it would cost the Union more than $40 million It would take years, if not decades, to identify funding to address the current Memorial Union issues. While UND is contributing 20 percent of the cost to support the new Memorial Union, UND is also asking students to help invest in the new Union. Students will have the opportunity to plan the new Union, helping to determine where specific offices and departments will be located, be involved in the detailed design and participate in developing and recommending policies.

If students vote no for the new Union the $40 million will go towards fixing window wells and foundations, new heating and cooling, better loading docks, new roof replacement and aging service equipment. The current Memorial Union was built in three phases in 1951, 1964 and 1983. Its aging infrastructure is outdated and has a lack of modern day features which revels many drawbacks. Some students say that it looks “tired and outdated” and that they are disappointed when they compare it with facilities that are offered at other regional campuses. The current Union was rated below average condition in 2015. Student fees may be redirected to address emergency repairs, which leaves less for other priorities on campus.

“Where is all our tuition going and why does the Union need $40 million in repairs? Have our tuition dollars not been going to fixing the Union all this time,” Penueta-Synder said.

Whether students vote yes or no we will still see an increase in student fees to fix the Memorial Union.