UND comes back from a Friday loss with a convincing win on Saturday. 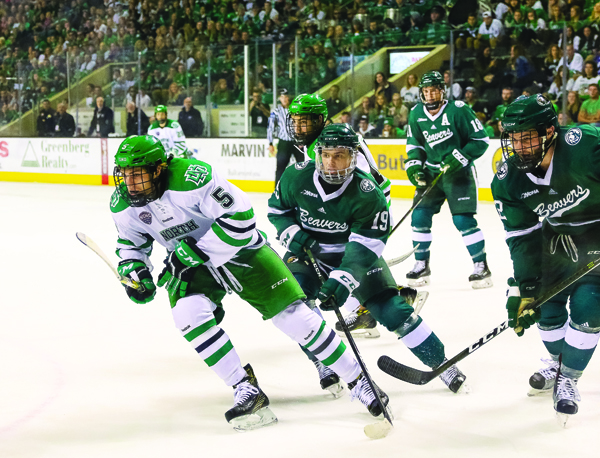 Hard work and tenacity. The overarching theme of the weekend for the University of North Dakota Men’s Hockey team when North Dakota faced off against the eighth ranked Minnesota State Mankato Mavericks.

The crowd at the Ralph did not have time to finish celebrating when the Mavericks responded 30 seconds later with a goal of their own.

Just as the crowd was getting quiet, junior forward Zach Yon buried one home just ten seconds later to ignite the Ralph crowd once again.

Gardner would get called for a checking from behind penalty early in the first. This would go under review and result in a five minute major and a game misconduct. This caused North Dakota to play down a center, and a good one, for the remainder of the game. The Mavericks went on to score on the resulting power play and took the life out of the building.

After giving up four goals on nine shots, sophomore goaltender Peter Thome was pulled just 2:07 into the second period.

Both teams traded goals for the remainder of the game. Max Coatta for the Mavericks put up a hat trick before the Mavericks added an empty netter to end the game 7-4.

While the score looked lopsided, North Dakota outshot their opponent by double digits for the third time this season. North Dakota put up 38 shots on goal and gave up only 21. The goaltending just was not there in times where it should’ve been and that cost the team dearly.

“We had a good start. We had momentum. We generated some offense,” head coach Brad Berry said. “We’re not really forcing, especially in the second period. It was just guys making individual mistakes at a time when it costs you, and we can’t have that.”

The score was a misrepresentation of the way North Dakota played. North Dakota never quit. They continued to outwork and play with a tenacity for the entire game.

North Dakota was granted an early power play in the first period once again. This time with sophomore forward, Grant Mismash, hitting a one-timer off the face-off.

The following rush, junior forward Cole Smith shot a high-glove on the Mavericks goaltender to give North Dakota the early 2-0 lead. However, the Mavericks came back to score twice on the power play to tie the game up heading into the second period.

Junior forward Ludvig Hoff drew a penalty shot just seconds later. Hoff did not connect on the penalty shot, but the crowd was ignited once again. North Dakota would get another power play with 23 seconds left in the second period but it ended up resulting in the Mavericks scoring a short-handed goal with just .4 seconds remaining.

In the first half of the third period, the game was very back and forth with possession, until Cole Smith caused a turnover with the Mavericks goaltender behind the net, resulting in an empty net for Smith to score on. Smith gave North Dakota the lead with 9:25 seconds left in the third.

“I tried to fake I was going to his backhand side, then jump to his forehand side,” Smith said. “He has had some iffy plays with the puck under pressure this whole weekend and he happened to just leave that there for me.”

The game ended with an old-fashioned WCHA scrum in front of the net. North Dakota picked up their first victory of the season, building tremendous confidence in the locker room.

“Big relief,” Berry said. “It’s one of those things where you try and do all the right things to finally get rewarded for it.”

North Dakota will look to carry this confidence into their big game against another old WCHA rival in the Minnesota Golden Gophers in Las Vegas. The Gophers are currently ranked sixth with a record of 1-0-1 after a series with No. 1, University of Minnesota Duluth.