Analyzing the incoming class of the UND Men's hockey roster 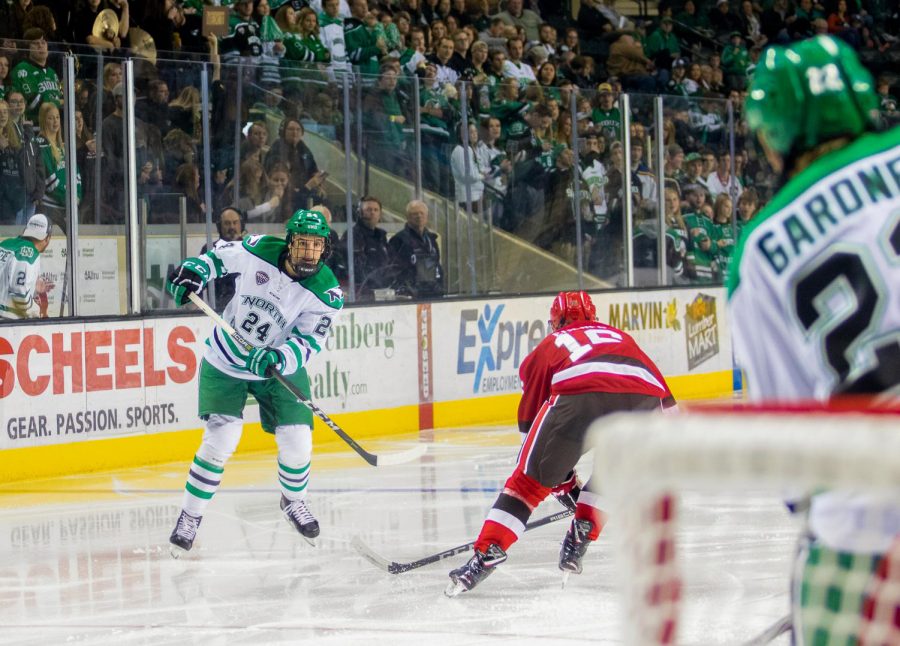 It is almost that time of year again here in Grand Forks. The University of North Dakota Men’s Hockey team takes the ice for their 72nd season. North Dakota looks to hang their ninth NCAA Championship banner at the Ralph Engelstad Arena. North Dakota is a hungry team with loads of young talent waiting to show off what they can do. The 2018-2019 North Dakota team resembles the championship roster of the 2015-2016 team.

While North Dakota lost many good players to graduation and the National Hockey League after the 2017-2018 season, North Dakota is confident in their ability to fill those holes in the lineup with the addition of the incoming freshmen class.

North Dakota has seven incoming freshmen looking to crack the lineup and make their mark. North Dakota has brought in four forwards, one goalie and two high profile defensemen. Both of whom were drafted by the Ottawa Senators in the first and second rounds of the 2018 NHL Entry Draft. The class as a whole has four players drafted by a NHL team. These young men have proven themselves on their former teams, but now they are ready to prove themselves to the proud fans and members of the UND Men’s Hockey Team.

The freshman forward group has four incredibly talented players that could make an immediate impact for North Dakota;

Gavin Hain: The 18-year-old, 5’11” 197-pound forward out of Grand Rapids, Minnesota played for the U18 U.S. National Development Team this past season. Hain showcased his ability playing for the U.S. team. Hain had 15 goals and 20 assists in 61 games for the U.S. team. He notably added a goal in the 2018 World Junior Championship. Hain was also drafted by former North Dakota head coach Dave Hakstol and the Philadelphia Flyers in the sixth round of the 2018 NHL Entry Draft.

Jasper Weatherby: The 20-year-old, 6’3” 206-pound forward from Ashland, Oregon does not just use his size and frame on the ice. Weatherby produces points to go with an intimidating size. Weatherby scored 37 goals with 37 assists in just 58 games for the Wenatchee Wild of the British Columbia Hockey League. Weatherby was drafted by the San Jose Sharks in the fourth round of the 2018 NHL Entry Draft. If Weatherby can produce just a fraction of what he did last season, North Dakota is in luck.

Mark Senden: The 20-year-old, 5’9”, 190-pound forward from Wayzata, Minnesota just wins. Senden captained two teams to championships, the first being for Wayzata High School when Wayzata won the 2015-2016 Minnesota State Hockey Tournament. The second being last season, when he lead the Fargo Force to the United States Hockey League Championship. Senden put up 15 goals and nine assists in 60 games for the Fargo Force. Senden is a complete team player who does whatever is necessary for the betterment of the team.

The freshman defensemen may be a small class, but they do not lack in talent or ability.

Jacob Bernard-Docker: The 18-year-old, 6’0”, 185-pound offensive defensemen from Canmore, Alberta does it all. Bernard-Docker put up 20 goals and 21 assists in 49 games for the Okotoks Oilers last season, en route to being drafted 26th overall in the first round of the NHL Entry Draft by the Ottawa Senators. Bernard-Docker is the only right-handed shot in the entire North Dakota freshmen class. Look for Bernard-Docker to be a key player on the left circle on the power-play this upcoming season.

Jonny Tychonick: The 18-year-old, 5’10”, 177-pound defensemen from Calgary, Alberta may be undersized, but can still produce on the ice. Tychonick scored nine goals and had 38 assists in 48 games last season for the Penticton Vees, putting up nearly a point per game that season. Tychonick was drafted in the second round by the Ottawa Senators in the NHL Entry Draft. Ottawa hopes their future defensive pair can build chemistry at North Dakota first. Tychonick hopes to showcase his ability in a deep defensive group at North Dakota this season.

The lone goalie looks to compete for the starting job with sophomore Peter Thome and senior Ryan Anderson.

Adam Scheel: The 19-year-old, 6’3”, 197-pound goalie from Lakewood, Ohio plays consistent in net. Scheel boasted a .927 save percentage and a 2.08 goals against average last season in 45 games for the Penticton Vees. He was the backbone of the Vees roster. Scheel can compete for the starting job

and should see some ice time this season.

The North Dakota freshmen class have proven themselves on their former teams. Now it is time for them to step up and play for the University of North Dakota and the greatest fans in college hockey.