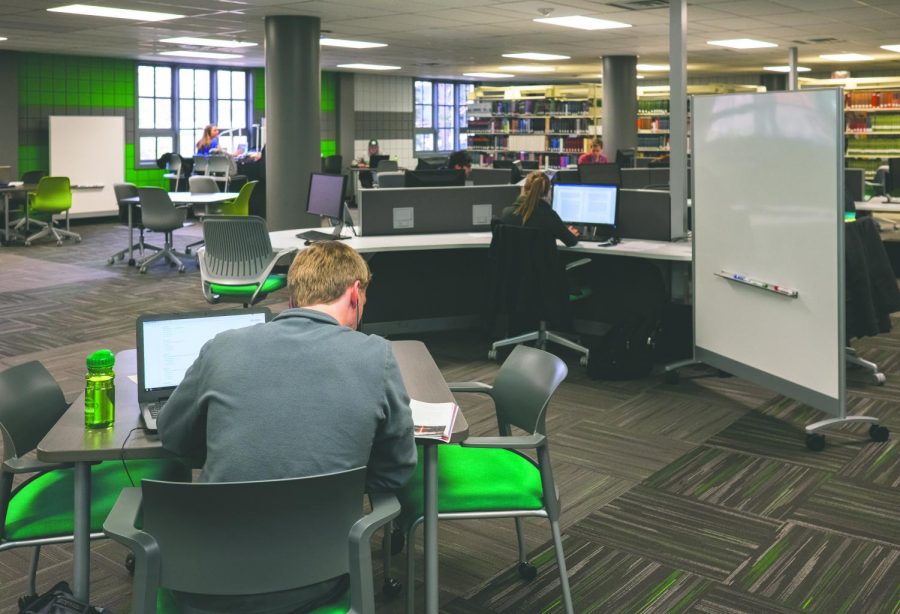 Four months later, the university has signed a contract with Pearson Online Learning Services and two UND graduate programs will be furnished and marketed by Pearson in the fall semester.

“Jeff Holm brought it to our attention and they made a really strong sales pitch,” Ronald Marsh, chair of the computer science program, said. “Seemed at the time it was something worth looking into.”

Earlier this year, when the computer science program moved from the school of aerospace to the engineering school, they agreed to put their courses and degrees online through an already existing platform, the Distance Engineering Degree Program (DEDP).

“I don’t think we need to use Pearson,” Marsh said. “The DEPD program here is already very successful.”

However, presumably because the program was just beginning the online transition, the university saw an opportunity to develop an entirely new cyber security masters program, backed by market research from Pearson. In a combined effort with the electrical engineering program, computer science has been working with Pearson to create an online masters program in cyber security.

The company isn’t meant to be involved in creating curriculum, but will work with instructors to create graphics, slides and the general digital infrastructure for online courses.

Marsh said the faculty in his program were cautiously optimistic about working with Pearson, but as the company became more inflexible, there was less enthusiasm.

“At first it seemed like a pretty good idea but the more Pearson started kind of forcing their – and I do mean that ‘force’ too, that’s a word you can use – force their scheduling plan on us, a lot of the faculty started saying ‘I’m not interested,’” Marsh said.

Unlike the types of online courses the university is already offering, which are 16 weeks and often taught alongside in-person classes, Pearson first demanded eight-week courses and has since cut it back to seven weeks.

This tight timeline concerns Marsh and other faculty in the program for two reasons. It’s a shockingly short span of time for learning complicated concepts and skills, especially for distance students who likely have full-time careers.

Secondly, there are the logistics of class development and hiring staff to teach these new classes. According to Marsh, the computer science program currently has three classes for the upcoming semester with no instructor, one of which is a part of the Pearson program.

There is also the question of university transparency. Despite widespread rumors and requests for the specifics of the university’s dealings with Pearson, faculty across campus were not able to see the contracts between the company and the university.

“To be honest I think a lot of us in the department were expecting more information up front,” said Marsh, who hasn’t seen the contract himself.

One of the concerns that faculty have with the specifics of the Pearson contract is the possibility that Pearson could retain the rights to parts of the curriculum they develop.

According to section 2.7.2 of the contract between Pearson and UND, “Pearson shall also retain all right, title and interest, including all intellectual property rights therein, in and to any work product or any other work of authorship or invention conceived of, developed or created by Pearson under the terms of this Agreement or applicable e-Learning Program.”

Pearson has been clear that they will not be writing curriculum, but because their employees will be developing visual products that help explain learning materials and assignments, the possibility might exist that Pearson could retain the usage rights to products that have been heavily influenced or authored by UND faculty.

Pearson will be overseeing two truncated semester programs in the fall: the cyber security masters and a masters in accounting for the business school.

For now, it remains unclear how UND will go about transitioning online classes to the Pearson system, or even if they intend to transition most or all of their online content.

Pamela Kalbfleisch, a communications professor who has taught online classes for UND in the past, said that Jeffrey Holm had also approached the communications department about utilizing Pearson for their online contract, but it seemed to her that her colleagues were not interested.

“It was our choice,” Kalbfleisch said. “At the time it didn’t seem that people wanted to do it.”

Kalbfleisch feels that at this time, it appears to still be each program’s choice whether or not they want to be involved with Pearson.

“Generally in academic decision, faculty are the driving decision makers,” she said.

Whether or not the two Pearson programs will be completed in time for the fall semester – and whether or not there will be qualified instructors to teach them – remains to be seen.

“There’s a lot of missing pieces,” Marsh said. “If we’re going to undertake this, we don’t want it to fail.”

Diane Newberry is the editor-in-chief for Dakota Student. She can be reached at [email protected]