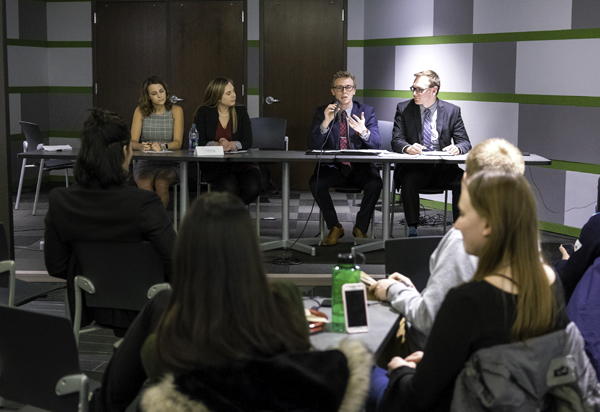 The runner-ups said there was an effort from the Hanson-Dschaak ticket and Sigma Nu fraternity, citing a Snapchat story posted by Terrell Wheeler. This photo was posted on the fraternity’s private Facebook group “The Nu Era” and called for fraternity brothers to vote for Hanson-Dschaak and then get free alcohol from the fraternity.

Hanson-Dschaak said they had no knowledge of the post until someone else had shown them after it had been posted.

They also said that not only were both campaigns organizing events during the stressful election night similar to the one featured in the Snapchat picture, but the post on Facebook featured a lengthy post where the caption called for anyone to vote for whomever they wanted.

Ultimately, the Committee dismissed Hanley’s appeal, saying there wasn’t enough evidence to prove the campaign coordinated with this event.

Much of the hearing then focused around what constitutes an “agent” for a campaign, rather than just a supporter. If someone is considered an agent for a campaign, that individual is held to the Election Code with more scrutiny.

A name that regularly came up was Nick Farris, President of the Sigma Nu fraternity on-campus.

The week of the election, a banner for both tickets had hung on the Sigma Nu house, switching from Hanley-Morlock to Hanson-Dschaak just before Election Day. According to Hanley and Morlock, this qualified the fraternity’s President and Vice President, Farris and Zachary Fernandez-Hann, as agents for the Hanson-Dschaak campaign.

In the hearing, Hanson and Dschaak supplied their list of agents. This list didn’t contain Farris nor Fernandez-Haan’s names. However, Hanson did note that Farris was invited to a meeting where the campaign would explain the rules and bylaws of campaigning.

When it comes to deciding who is and who isn’t a campaign agent, there is little to no oversight. As mentioned before, Hanson’s team submitted a document with a list of their agents’ names. They admitted they had been adding and subtracting names to the list throughout the campaign season.

A person can support a campaign and talk about supporting a campaign without being considered an agent. Election Committee Chair, William Candia, noted that this is an unsafe precedent in the Election Code and was worried that a person can avoid conflict and/or punishment by simply calling themselves a “supporter” rather than an “agent.”

Ultimately, Farris wasn’t able to attend any meeting nor campaign, thus Hanson claimed there was no coordination on the campaign’s part for this fraternity post. Farris had also been connected with the Hanley campaign, where he didn’t attend any of their campaign meetings either.

In the hearing, it was discovered that the Sigma Nu house was being flipped from Hanley to Hanson just a few days before the election, including a change in banners being hung on the Sigma Nu house in support of these candidates.

Hanson’s VP candidate Kaleb Dschaak said this sudden change was brought on by the house’s frustration over Hanley’s team promising Farris a position on the SOFA Committee.

Nick Farris, Zachary Fernandez-Haans and Terrell Wheeler were unable to be reached for comment.

The full-hour hearing is available to the public at the UND Student Government Office. However, many of the accusations made in the hearing remain unconfirmed until any of the other parties corroborate their stories.

Correction: An earlier version of the story said that Terrel Wheeler was a member of Sigma Nu.

Jacob Notermann is the staff writer for Dakota Student. He can be reached at [email protected]