Bringing the community together through athletics 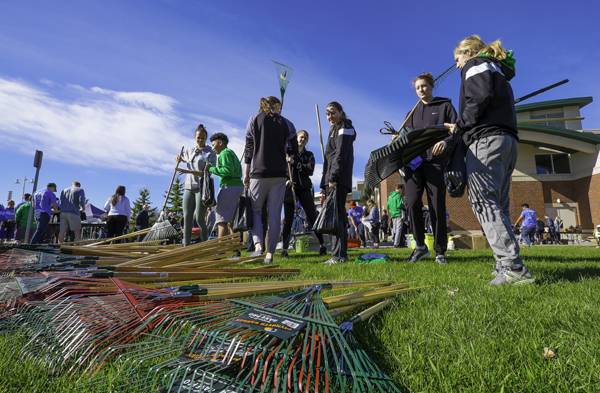 Members of the Fighting Hawks women's basketball team pick up rakes and other tools prior to volunteering for The Big Event last year.

Growing up, my dad was an alumni of the University of Minnesota. As a die-hard Minnesota sports fans, we went to countless Gopher basketball, football and hockey games. We once travelled four hours just to go to a conference track meet the Gophers were running in.

My sister and I were immersed in college athletics before we began to compete in sports ourselves. We began idolizing the athletes and picking out our dream colleges before we were out of elementary school. College athletics brings a community of support together, puts a face to the school and brings people to the university.

College game-day is widely talked about across the nation. People can sit in their homes and cheer on their alma-mater or watch their relatives compete just by tuning in to ESPN. Throughout the game the cameras will flash to the student section cheering their lungs out and seemingly having the times of their lives.

The media presentation of college athletics, although sometimes maybe glorified, brings attraction to the university.

In addition to the glory, it has been proven that athletic success brings people to a school. If a college is doing well in sports, enrollment goes up. It’s called the Flutie Effect. Based on a quarterback from Boston College in 1984, Doug Flutie launched a “Hail Mary” pass in the last second of a game for what ended up being a 48-yard completion.

According to Forbes, applications to Boston College in the two years following Flutie’s play increased by a whopping 30 percent.

Doug J. Chung, a Harvard Business Associate Professor, conducted research on the subject. He found that on average, “when a school rises from mediocre to great on the gridiron, applications increase by 18.7 percent.”

Specific to UND, athletics brings more people to Grand Forks. North Dakota isn’t typically a “dream location” by any means. Most out-of-state students are brought to UND either for the aviation program or to be on one of the sports teams. UND Athletics is a major contributor in putting Grand Forks on the map.

UND Athletics also gives a face to the university. UND alumni are very strong supporters of athletic teams and continue to show their support from generating revenue by purchasing season tickets to building sports complexes for UND. For example, the High Performance Center was just recently built using $19 million of privately funded money, all from UND alumni.

The Ralph Engelstad Arena, valued at $104 million, was also very dependent on private funding from community members and alumni.

Another way that UND Athletics gives a face to the university is through volunteer work. Each year, the sports teams compete with each other to see who can obtain the most volunteer hours. This motivates members of the team to get out in the community and provide service to those who need it.

Just recently, UND Athletics participated in an annual SAAC (Student-Athlete Advisory Committee) food drive that collected over 4000 items. All of the items were donated to the Grand Forks Salvation Army.

In the eyes of many, college without athletics doesn’t seem like college. From growing up watching games to giving back to athletics and the university as life goes on, college athletics remains a large part of many student’s lives long before and after graduation.