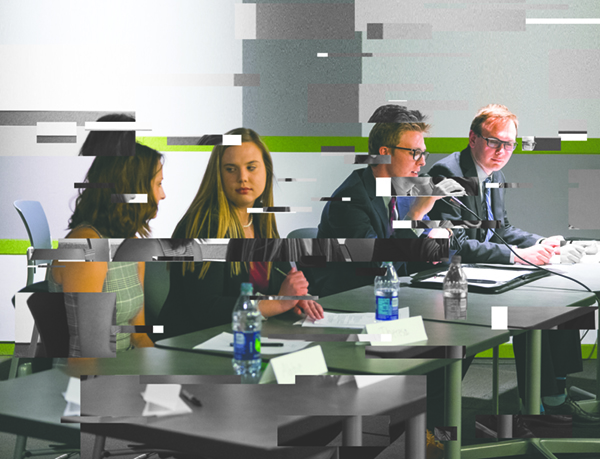 University of North Dakota students’ ability to vote was delayed Wednesday due to a glitch in the online program, paralyzing campaigns and voters for hours.

When the election opened at 8 a.m. on Wednesday, students quickly began reporting problems with the link. Complaints included the ability to vote for senators in the wrong college and being unable to vote for student body president.

Not even an hour after the election opened, the decision was made to close the link and suspend the election.

Shortly after, both Hanson and challenger Theresa Hanley were notified of the issues and called for an emergency meeting in the Memorial Union with Election Committee Chair William Candia and Committee Advisor Jeff Gibson.

It was at this meeting that the candidates agreed to continue the election until the link opened and the closing time would be 10 p.m. regardless of when the link would work again.

While this was happening, there was mass confusion amongst the students and the campaign volunteers. At 7:30 a.m., an email was sent to all the students containing the link to vote. Not a single notification or email to the students was sent until 11:45 telling students the polls were open again.

Candia said that they were unaware of what caused the glitch, but were in regular communication with the company that supplied the program for the election. After no success in finding what the cause was, it was determined that the ballot system would have to be rebuilt Because of this, all of the votes before the blackout were thrown away. Students were notified to re-vote if they had originally voted before 8:45 a.m.

Hanley said her camp was concerned and didn’t know what to do. So in the meantime, both campaigns remained on the ground handing out campaign gear and food. Hanley said the timing of the blackout probably worked out better for them.

“Instead of getting the breakfast rush, we got the lunch rush and we were prepared for that,” Hanley said. “We’re just having fun handing out pizzas to our peers.”

However, the timing of the blackout lines up with times of high traffic on-campus for morning classes. With it being a Wednesday, high traffic between classes was hourly, rather than every hour and a half.

“The other concerning part is that students who voted in the morning didn’t know they could re-vote after the system was rebuilt,” vice presidential candidate Abbie Morlock said. “We were asking students if they voted and they said ‘yes,’ then we said ‘okay, what time?’”

The amount of time the election was suspended and the small margin of votes separating the candidates make it reasonable to believe the blackout could’ve affected the margin and or the winner.

Candia said one concern he had was the high number of appeals to the election that could come up as a result of the day’s events.

The Code of Elections doesn’t mention what actions can be made when situations like these happen. The code does give the election committee and the chair certain powers to make on-the-spot decisions. However, many decisions were made as an ad-hoc committee made up of the candidates, Gerhardt, Gibson and Candia.

“Whatever decision was made had at least some input from the candidates,” Candia said.

Hanley said she and Morlock are unsure of whether or not to appeal the results of the election. However, they did agree that if they do appeal, it will not relate to the blackout. They said they don’t know who voted for whom before the crash, so there is no ground to base the appeal on that.

“It was only the first hour of voting when that was happening,” Hanley said. “It’s too early to tell. The administration did all that they could.”