Breweries: Not just for beer anymore

Taking a closer look at Half Brothers’ seven nights of music. 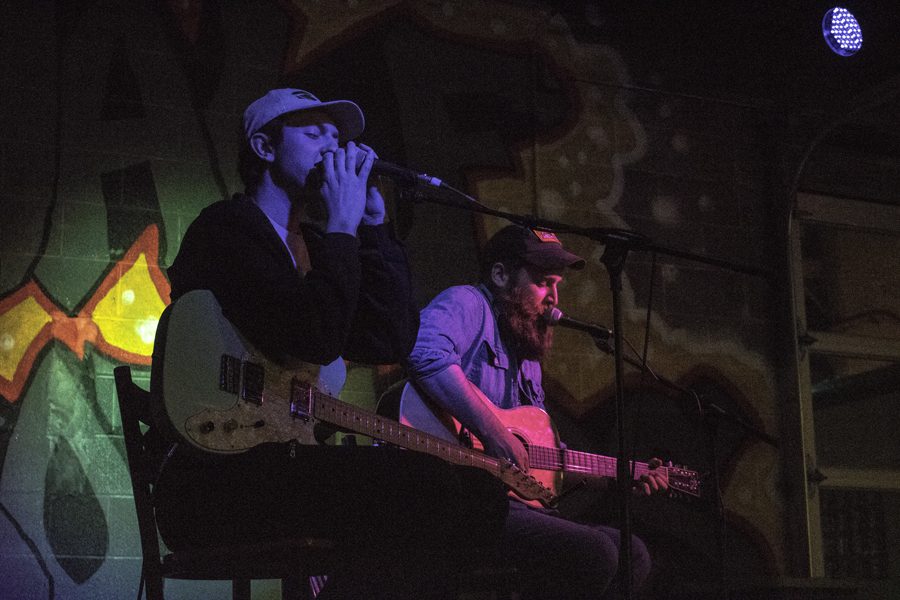 It’s 8:30 on a Friday night and Half Brothers Brewing Company is alive with the sound of voices and laughter flirting with one another through the air. It may feel like the second arrival of winter in April, yet thanks to the warmth of community that one feels when walking through the front doors, one forgets there is snow outside.

Six months have passed since downtown Grand Forks was graced with the presence of Half Brothers. What many people are unaware of is Chad Gunderson had a vision for creating a place for people to come together and experience community, not just a brewery.

“Time and time again we see breweries embracing music, and this contributed to this vision of community that Chad had,” Ali Rood, sound and lighting manager said. “The music community has embraced this idea and so has the Grand Forks community.”

Something new that Half Brothers has brought to the Grand Forks community is live music, seven nights a week. Half Brothers opened in October of 2017 and the first month of live music was in November. The only nights that there is not live music at the brewery is when Half Brothers is closed.

“We do an open call for musicians,” Rood said. “We have solo artists on weekdays and usually have bands playing on the weekends.”

Rood is in charge of booking the performers for the month. A musician herself, she is a Grand Forks native and started her musical career at the Big Forking Festival the summer of 2015. She heard about the vision that Gunderson had and got into contact with him before the opening of the brewery.

“The more we talked about Half Brothers, the more music was brought up in the conversation,” Rood said. “This was exciting to me because I loved listening to live artists and performing in the community. I started booking the musicians, then started running sound during the performances.”

Half Brothers prides itself in providing musicians with a good performance experience. Most locations are unable to provide musicians with a stage, sound system and lights. At Half Brothers, musicians are provided with a dedicated spot that makes them feel valued. Word about how Half Brothers treats musicians has spread throughout the music community and musicians from farther and farther away are coming to Grand Forks to perform.

“We see artists from Grand Forks, Fargo, Minneapolis, bands who are touring through or traveling through,” Rood said. “We see all types of musical genres; jazz, hip hop, heavy metal, but mainly acoustic. We just booked an artist from Maryland next month for the May Month of Music.”

Not just anyone can come and perform at Half Brothers.

It was easy for Gunderson to achieve his vision of community through music and beer. Visitors are greeted with picnic table style seating when they walk through the doors. The stage also fosters interactions between the audience and the musicians and is a symbol of community.

“Music 24/7 and community was a long term goal from the start,” Rood said. “While this space was being remodeled, Chad started a kickstarter campaign to raise funds for the stage and the community stepped up and purchased it. The artwork on the back walls were also created by local artists. Chad put out a call for local artists and was met with many talented individuals.”

Friday night, Hatton native David Allen took the stage with Minneapolis native Joe Kopel. Allen’s voice was deep and gritty like the winters in North Dakota, but brought a warmth to the stage. Kopel’s voice was smooth as softened butter on a warm day and had a clarity to it that shone throughout the room.

They both sang original compositions and joined together for a few covers.  The inspiration for Allen’s latest album ‘Lovers and Liars, Gamblers and Thieves’ was tragedy, specifically when it comes to love.

“This is just the story of two people who were in a broken relationship,” Allen said. “There was a lot of unhappiness and pain, but we all go through that in life. Just two bottomed up people who were unhappy.” The inspiration for Kopel’s album was a little different.

“My recent album is called ‘Topics,’” Kopel said. “I was writing near the end of my college time and a little bit after. I was just reading the news and hanging out on Facebook and trying to distill what was going on in the world and what my place was.”

Towards the end of the night, Allen and Kopel invited a college student to come onstage and sing with them. This is the type of community that Gunderson envisioned almost a year ago.

Devon Abler is the A&C editor for the Dakota Student. She can be reached at [email protected]