Reliving the loss of the UND Women’s hockey program 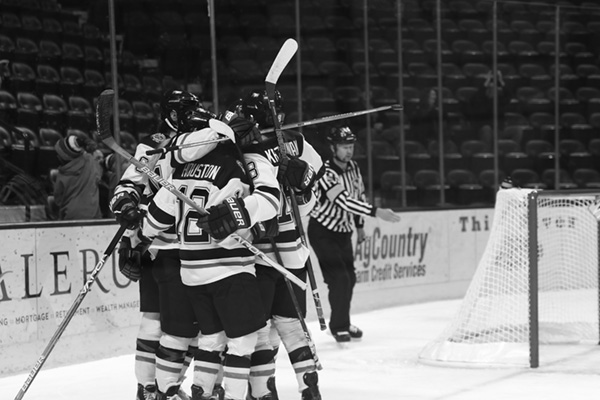 This now divides the family that once was the UND women’s hockey program, a program removed after a short 15 years, a program that showed more promise as each year went on, a program cut in its prime.

One year. What has happened in one year?

Finding homes for each outstanding athlete was the primary concern when the news first broke for the program’s coaches. Spending countless hours calling every program in the nation to find out what programs were still looking for players and what programs were interested in the now free agent Fighting Hawks.

Head coach Brian Idalski and his coaching staff tried to maintain a careful balance between rehoming the players and allowing them time to cope with the terrible loss. That did not stop other programs from calling players before their granted mourning period to make sure they could offer them a spot in their roster before anyone else, adding stress to an already chaotic situation.

“The first three days our whole staff was on the phone to every program in the country to have a little bit of control over the process,” Idalski said. “We had our kids getting phone calls and emails from coaches before they even got into their meeting with the Athletic Director and President.”

Current students weren’t the only ones being bombarded by phone calls and emails from programs across the nation. Recruits and their families, who had no idea of the news that was currently devastating UND, were being told of the program but by other programs who wanted them.

By NCAA regulations, coaches from other programs trying to recruit the recently eliminated UND players wasn’t illegal, but it left a sour taste for Idalski.

“For me to recruit someone for two to three years to talk to their families and build that relationship for them not to hear it from me, that sucked,” Idalski said.

Sleepless nights and tireless days passed and eventually nearly all players were rehomed and set to begin their hockey careers with new programs.

“The coaching staff was really generous and respectful after the program was cut,” former UND goaltender Kennedy Blair said. “They were going through the same emotions as us players were going through. They gave us time to soak it all in, they told us when the time was right to decide and look at new options for our future home. They wanted to make sure we all went somewhere where we would play and fit as a player.”

“Coach Idalski called me, it was very emotional but he said him and Fabian would do everything they could to find me a new school,” former UND recruit Taylor Wemple said.

The coaches commitment to these players reached past a job description and it was evident that they weren’t slowing down before everyone was where they deserved to be.

“They were very supportive once I committed to St. Cloud, I got a very heartwarming message from Fabian that made me cry and a phone call from Idalski,” Wemple said. “Idalski congratulated me and said he would be watching over me in the news and in games. He was so happy for me, I think we both cried a little.”

Idalski, Assistant Coach Erik Fabian and Equipment Manager Kevin Vaughn were only few of the programs staff that followed up on that promise.

“I’d check the box scores every weekend,” Vaughn said. “I was thought it was bittersweet, I saw how well they were doing and all I thought was if we were all together this year we would’ve been the best.”

On multiple occasions the former staff would even travel to games to watch their athletes and root them on.

“I went to Bemidji three times and saw Charly (Dahlquist) with Ohio State, Kennedy (Blair) with Mercyhurst and (Fabian) and I went to see St. Cloud,” Vaughn said. “(Fabian) and I even went out to Duluth to watch (Ryleigh) Houston.”

An immense effort put on by the entire staff to get their family of players into new homes and the tough goodbyes shortly followed. While the athletes found a groove in their new homes and the heartbreak of losing a program like their own slowly lightens the further removed they became, what about those left behind?

Coaches and staff of the program who stayed in North Dakota are reminded every day of the ghosts the program left behind. Their  actions compared to those of a parent, treating each and every one of the women on the team as their own children and then having to send them off into the hands of others in hope that they are taken care of the exact way that they would have taken care of them.

A sport that for years has been on the rise for women now faced the first major setback, a setback many feared would lead to the demise of the sport all together. The darkest day for the future of women’s hockey, a day that cannot be stricken from history but instead is feared to be the blueprint for hockey programs to follow and UND’s name will forever be attached to it.

“Somethings started to be said but there was really no inkling or consideration that it was factual, so it was business as usual,” Idalski said. “I had a recruit coming in next week and I thought ‘would the really allow me to do that?’ if it was even on the cutting block you would assume they would say ‘hey you guys are under consideration, we’re going to hold off until we finish this.’”

That is not how things panned out. Anyone that had anything to do with the program was kept in the dark with only gut feelings and rumors to raise red flags of the actual potential of losing their program, a true blindside that left everyone speechless.

March 27, 2017, the Monday leading up to the announcement. The rumor mill was officially in full swing. Player’s and staff had seen red flags and one big red flag arose when local sports writer, Tom Miller, went on a MacTalk Live to discuss the program being cut which left everyone with the unsettled feeling.

This would be the final conversation the head coach had with his team, by the end of practice the news had broken and the team was the last to know.

Equipment manager Kevin Vaughn has received an email to report to an emergency meeting at Gamble Hall, while coaches Idalski, Erik Fabian and Peter Elander were still working with the players on the ice. Idalski made the decision to finish practice, their final practice as a program.

“I knew that Wednesday was going to be the day,” Vaughn said. “I knew once they had announced the hiring of the new soccer coach that was it for us, I was just waiting for it, soccer had become safe. All the girls were on the ice and they could sense that something was wrong.”

Along with the swimming and diving athletes and staff, the women’s hockey program gathered into a room in Gamble and were greeted by Brian Faison while President Kennedy was nowhere to be found. A man that was the face of the university that was cutting their programs had not even considered showing his face to those who he had just taken their hopes and dreams away from. Programs that went into the room had now been left without a place to go.

For months after the players had packed up and left North Dakota for the last time the silence became deafening.

“We went a couple months without contact from the athletics department,” Idalski said. “Once school was done and the student athletes left there was a void of what was going on and that played out for a few months.”

What was once a close community had quickly become something of a place of exile, the program had become something of a widely debated topic throughout Grand Forks and the UND community and the staff that remained had to deal with people who were unable to deal with them.  They quickly became social pariahs, as if no words could be said to make things better people slowly just stopped talking.

“It was the first time since I was five years old that I didn’t have a team,” Idalski said. “Your body adapted to ‘there’s somewhere I have to be’ and I should be on the ice, so when you don’t have it it’s a weird transition.”

While many were asking the question “what were the athletes going to do without a program?” there wasn’t really a question about what the coaches and staff were going to do once it was gone. They sacrificed so much for the program while it was running and still after it has been removed. A program that was their livelihood, the reason they woke up in the morning, the career they chose and the days that didn’t feel like work and while the schedule wasn’t ideal for most, no one was ready to trade that in for an office.

A community has been dismantled, a hope has been crushed and a future has been dimmed with the loss of this program and yet there is an expectation that the conversation is supposed to subside, but it shouldn’t.

It’s been an entire year of heartbreaking change and until there is a women’s hockey program back in the Ralph Engelstad Arena this is a conversation that will continue to resonate within the women’s hockey community and beyond so no other program have to suffer.

North Dakota will not be known as the blueprints for programs close their doors but the inspiration for programs to grow to their fullest potential to one day meet standards that were once held by the North Dakota Women’s hockey program.