The Truth and Lies of Art, Politics, Justice and History 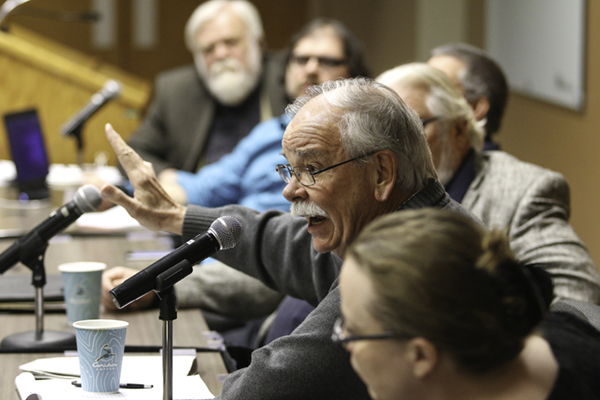 This years UND Writers Conference aimed to create discussion about the truth and lies within art, politics, justice and history.

No matter what field a person is in they aim to bring light and truth into an area of darkness.  Whether it is in researching a cure for cancer or researching what happened to the residents of the Virginia State Colony, there is truth and lies in all works.

As I attended the Writing Conference this year I was especially excited to hear the featured authors/artists speak in the keynote speaker panels.  Each author/artist featured writings/works that represented a story. Each story that was told brought light into a dark situation. Situations that were covered up and criminalized. Featured authors and artists included:

Molly McCully Brown, author of “The Virginia State Colony for Epileptics and Feebleminded”;

Nicholas Galanin is a “multidisciplinary artist whose work offers perspective rooted in connection to land and an intentionally broad engagement with contemporary culture” according to the writers conference website; David Grann, author of “Killers of the Flower Moon: The Osage Murders and the Birth of the FBI”; Marlon James, author of “A Brief History of Seven Killings”; Lauren Markham, author of “The Far Away Brothers: Two Young Migrants and the Making of an American Life”; and Ocean Vuong, author of “Night Sky with Exit Wounds.”

Each author/artist brought different experiences and thoughts to the panel’s throughout the conference. Unfortunately, Ocean Vuong could not make the conference due to having the flu.  His presence was greatly missed and we wish him a speedy recovery.

A large question that was addressed throughout the panels was how does the current political climate affect their writing?

Markham commented that her work “Far Away Brothers” wasn’t influenced by the political climate but that the work speaks to the current political climate. Brown and James agreed with the sentiment.  All authors agreed that history often repeats itself.

On the thread of the political climate the topic of President Trump came up.

“It’s a weird time,” James said. He continued by saying that the current climate feels like third world politics and it is never something that he expected to see here in the United States.

Markham agreed commenting on how it feels like the political climate is weaponizing migrants and immigrants, stating “walls have never worked well” and that society is being told that our “safety is threatened by other people’s needs.”

Galanin summed it all up nicely by stating that “politicians have never been on our side.” He continued to bring points to the table by saying how politicians not being on the side of the community is nothing new for the indigenous peoples.

All of the authors/artists have works that push the boundaries of comfort by addressing issues of slavery, discrimination and euthanization in our society. Authors/artists were asked “to what extent do you need to cause discomfort (in your work)? What do you do as writers?”

James made the observation that he finds that older generations are better at handling discomfort that we do now. James finds it is best to be straightforward in his writing, to be thoughtful and to try to look at things from a different angle.

Brown agreed with James saying by approaching the time/situation with varying temperatures was the best way to go. In some cases Brown explained you can be loud and in the reader’s face but for others a softer approach is more appropriate. Being dynamic in approaching unforcortable topics is the key to getting the point across.

Markham summed everything up nicely by stating that people do not learn through shame or fear.

Authors and artists spoke of their approaches to their works and how they create truth through their work.

Galanin spoke of how the connection to the land, community, dialogue and history brought truth to his work.

Brown stated that she feels it is impossible to create truth. To Brown if we are receptive to what we are listening to and put away our own agenda we can get to the truth.

Grann said that being open minded is key to getting to the truth through research.

Throughout the conference discussion of what was talked about in the panel’s was on everyone’s minds. Everyone who attended the panels walked away with something new to think about.

Through the panels we discovered there are lies in everything but with an open mind, research and growth the truth can be found. Wrongs can be right and maybe with luck wounds can heal. All of the featured guests agreed that growth is never comfortable but to be uncomfortable is necessary for growth.

Aimee Coons is a A&C writer for Dakota Student. She can be reached at [email protected]