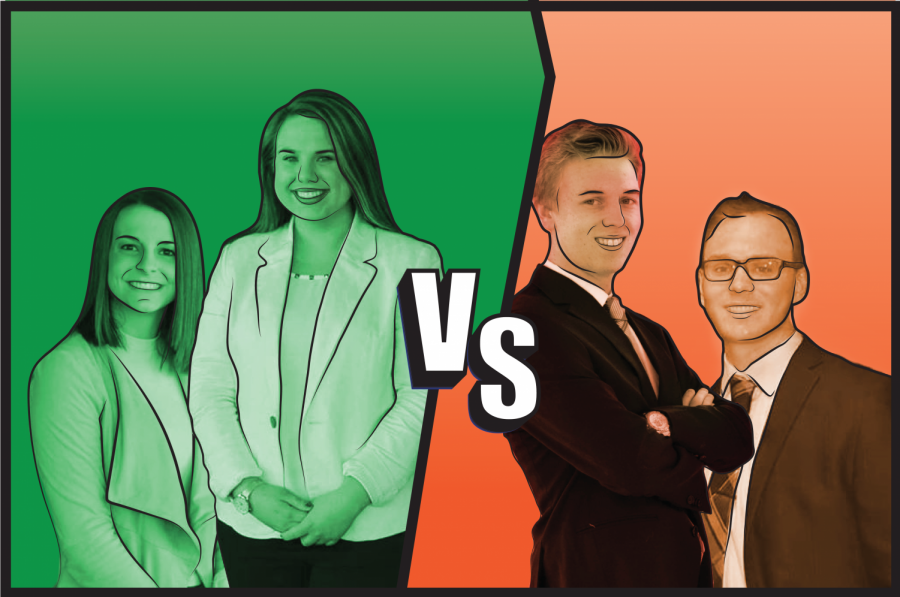 The race for the UND Student Body Presidency began last week with the announcement of three tickets running for the Executive Office.

The three announced candidates, in chronological order, were Theresa Hanley, Erik Hanson and Izaiah Pritzl. Hanson, the current Student Body Vice President, announced his candidacy last Tuesday, making his ticket the closest one to being an incumbent. His running mate is President Bachmeier’s Chief of Staff and former Student Senator, Kaleb Dschaak.

Dschaak teased a campaign announcement on his personal Facebook page before spring break. That post said the final announcement would be made on March 20.

Hanley, a Residence Hall Senator in the UND Student Senate, announced the day before Hanson. She neither confirmed nor denied that the Hanson announcement date played a role in when her campaign was launched.

Hanley named Abbie Morlock, a criminal justice major, as her VP. Morlock is an off-campus Student Senator as well as president of her sorority, Alpha Phi.

The Hanley-Morlock ticket’s slogan is “The change you need. The voice you deserve.” According to Hanley, that change refers to a stronger commitment to enacting.

Examples include changing Wellness Center hours to more convenient to students, making the library more accessible on weekends, as well as appointing a delegate to the Grand Forks City Council.

Pritzl, however, dropped out of the race on Saturday due to an unanticipated complication with his VP candidate, Paul Henning. Pritzl said he plans on pursuing a seat in the Student Senate instead.

“We were already confident in our own ability,” he said. “However, once we started getting support from the people around us, it made us believe we could have really did it.”

Similar to last year, the two main contenders are from the same ticket. Last year, Bachmeier and Blake Andert were the two front-runners. At the time, Andert was the VP to then-President Brandon Beyer; Bachmeier was Beyer’s Chief of Staff. This year, although the VP and the Chief of Staff are running together, Hanley ran for Student Senate under the Bachmeier ticket with Hanson last spring.

Despite being on the same ticket last spring, Hanley has regularly been the voice of opposition or played devil’s advocate in the Student Senate.

For students interested in running for any elected position in the Student Government, the last day to apply to be on the ballot is Wednesday, March 28. According to a memo sent to Student Senators, the Elections Committee extended the previous deadline of March 17.

Packets and information regarding applications are available at the Student Government Office in the Memorial Union. However, students can still run a write-in campaign after this deadline. The March 28 deadline refers only to students applying to have their names on the ballot. All campaigns must follow the guidelines and regulations as posted in the Code of Student Government Elections.

Election Day is Wednesday April 11. Students will be emailed a link that morning and will cast their ballots online throughout the day.

Jacob Notermann is staff writer for Dakota Student. He can be reached at [email protected]