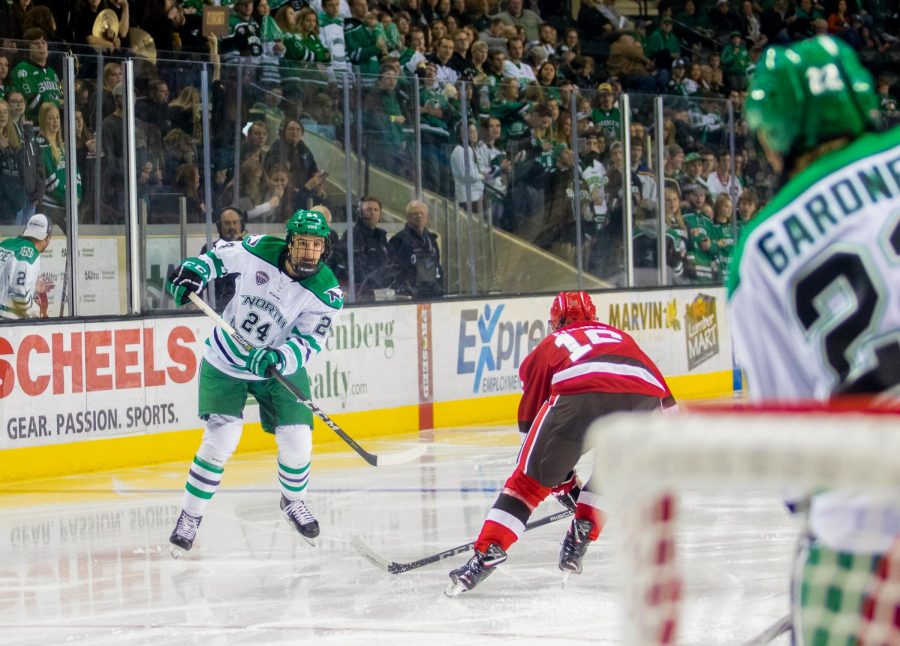 Early signings at the University of North Dakota are very similar to the nature of blizzards: they always pack a punch and usually happen more than once a year. Christian Wolanin and Shane Gersich became UND’s 99 and 100th players in history to make it to the NHL. Wolanin signed on with the Ottawa Senators last Wednesday, and Shane Gersich officially signed last Friday. These early signings came a bit earlier this year, after UND failed to make the NCAA national tournament for the first time in 16 years.

However, early signings this year were not as intense as the past two years. Early signings after the 2016 and 2017 seasons came with a few more blizzards and took rather large parts of the program with it.

After the 2016 championship season, UND lost five of the top players on the team to early signings that summer. Paul Ladue had been highly sought after by the Los Angeles Kings since he came in as a freshman and finally caved into the NHL pressure. Nick Schmaltz, after an outstanding sophomore season, took off to join the Blackhawks and made an immediate impact in their offense, considering he played on the top lines throughout his short career thus far. Troy Stecher made the roster in Vancouver and quickly became the fan favorite rookie of his first season. Keaton Thompson left a year early to join the Ducks organization but still failed to touch the ice for the NHL squad since leaving UND.

Luke Johnson remained in the Blackhawks system with the Rockford IceHogs.  Johnson has been a clutch performer for the AHL team during his progress towards making the Blackhawks roster to reunite with his former teammate, Nick Schmaltz.

Notable players to stay in town and continue with their collegiate career after the championship were Tucker Poolman and Brock Boeser. Poolman had a desire to stay one more year in anticipation to play with his younger brother Colton, who would be competing for UND the following year. The brotherly duo ended up working out incredibly well the following season. Brock Boeser came back after arguably one of the most notable freshman season performances of any UND hockey player. Brock joined former Sioux standout Zach Parise as the only freshmen to register a 50-point season in the last 35 years.

Enter Tyson Jost. Jost is the only player to have ever come to UND and leave after only just one season of play. What a season of play it was for the standout Canadian. Jost decided to sign his entry-level contract with the Colorado Avalanche after the overtime loss in the NCAA playoffs to Boston University his freshman year.

Following his signing, Brock Boeser decided he wanted to continue his success at the professional level. Brock Boeser, in turn, made the all-star game as a rookie during his first full season with the Vancouver Canucks, where he won the shooting accuracy competition. Boeser was also in the top five of the scoring race in the entire NHL, not just for rookies. While having an outstanding year, the Minnesota native UND alumni ended his season early after suffering a back injury after an attempt to hit Cal Clutterbuck sent him into the open door of the Vancouver Canucks’ bench.

Tucker Poolman also decided to leave after playing one year with his sibling, to join the Winnipeg Jets organization. Jets coach Paul Maurice told the Winnipeg Sun at the beginning of the preseason this year that it’s “possibly the first year in the last three we won’t have a pure rookie going into opening night,” Maurice said.

Poolman may not have played the opening night against Toronto or their second night against Calgary, but he played in their first win against Edmonton on October 9.  Poolman,  who has been defying all odds put in place against him, has been playing very well for the top-ranked Winnipeg Jets this season as they approach playoffs.

Of the 27 players that UND had on the roster for the 2016 national championship season, a third of the team has left early to pursue their NHL careers before their final season was up at UND. Some may be frustrated with the amount of talent that the program has lost too early, but it serves as a testament to just how well-rounded and defined the men’s hockey program at the University of North Dakota really is. As Grand Forks Herald sports reporter, Brad Schlossman posted on Twitter:

“We’re still less than two years removed from the 2016 national title game and more than a third of UND’s players from that night are currently in the NHL.”

That is something a community, a university, and a program can be proud of.