Jamming in the bluegrass 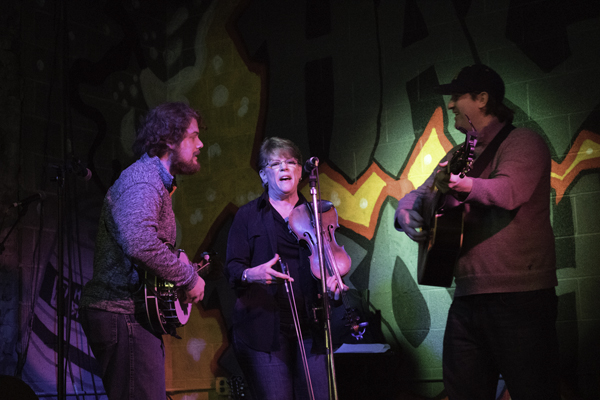 Bluegrass music isn’t something one would think to hear in Grand Forks, North Dakota but the Flatt Mountain Bluegrass Boys brought an excellent musical experience to their audience at Half Brothers Brewing Company Friday.

Having grown up with bluegrass and country music, I was excited to hear the Flatt Mountain Bluegrass Boys play. They did not disappoint. Listening to them reminded me of my grandmother’s house in southern Missouri and hearing my dad play guitar on the front porch. It was like going to a home I had not been to in many years.

Bluegrass musics roots are in Kentucky. Bluegrass is a form of music blended from different cultures and is one of the first forms of traditional music in America, including country, gospel, blues, Cajun and Native American music.

Watching the Flatt Mountain Bluegrass Boys play their music was great fun. The audience clapped and stomped out a beat to go along with the music and cheered loudly for every song.

Their traditional bluegrass music had themes of love, daily life and home. Their music is easy and fun to listen to; it’s something that everyone can relate to and appreciate.

I spoke with Michael Prewitt and Joe Andrus after the show. Prewitt, an English graduate student at UND, hails from Kentucky and started playing music at 8-years-old. Andrus is from Minot, North Dakota and grew up to listening and playing bluegrass. The two met at Cross Ranch Bluegrass Festival last year and have been playing together since.

They explained that bluegrass is a kind of music that is fluid and can be easily improvised. This was shown during the Flatt Mountain Bluegrass Boys performance. Group members from the American folk band Northern Light were there and joined in with the Bluegrass Boys for a couple songs.

Despite having not having played with each other before the two bands melded together wonderfully and gave the audience a great treat to hear the blending of the two different styles.

Hearing the Flatt Mountain Bluegrass Boys was a wonderful experience. It was something I wouldn’t have expected to hear in North Dakota since Bluegrass has its roots in the south. But Prewitt and Andrus explained “bluegrass is a family thing.”  Families grow and move taking their music and traditions with them.

The music of the Flatt Mountain Bluegrass Boys is an excellent addition to the local music scene here in Grand Forks. Bluegrass is a one of a kind sound and is best heard live. For details on their upcoming events see their Facebook page: www.facebook.com/FlattMountain.

Aimee Coons is an a&c writer for the Dakota Student. She can be reached at [email protected]