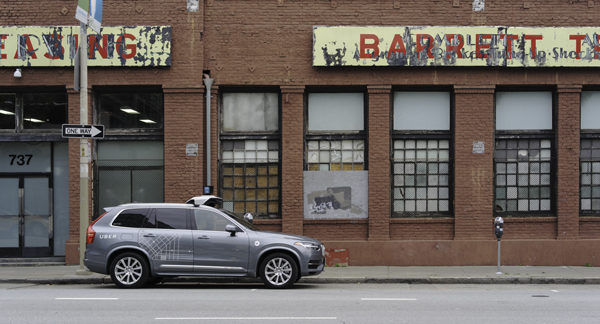 A self driving Volvo XC90 is parked outside 737 Harrison, the unmarked headquarters of Otto, a San Francisco, Cali. autonomous trucking company acquired by Uber in 2016. Dllu / Wikimedia Commons

Picture this: Your alarm clock goes off at 6 a.m. You jolt out of bed and rush to get ready and out the door, still barely awake. You jump into your car, where you recline your seat and resume your night’s sleep on the way to work. Today, self-driving cars make this our reality. How cool would it be for your car to automatically drive you to wherever you wanted to go without you actually driving, with nothing but the single push of a button?

I cannot wait for this technology to become cheap enough for the average Joe to use. However, as with any new technology, people will initially be very hesitant to use it.

The way I see it, there will be two main problems for self-driving cars to become a norm for society: safety and the price tag associated with such vehicles.

First, let’s talk about safety. Before I even talk about self-driving cars, let’s think about airplanes. Every day, millions of people around the world are packed into aluminum tubes and launched into the air with no question. Yet for some reason, people are still worried about these cars, the idea of which is less far-fetched than that of giant chunks of metal flying through the clouds.

Google has been testing their autonomous cars for a while. Waymo (formerly called Google’s Self Driving Car program) has driven over two million miles around the country and has only had one at-fault accident, according to the Huffington Post.

That is the lowest at-fault rate of any driver demographic and ten times lower than the safest driving demographic of human drivers. Seeing as how most cars don’t sip the occasional beer and text behind the wheel, drunk and distracted driving would be eliminated by these cars.

According to the same study, of all the other accidents the Waymo car has been in, human error was at fault. Self-driving cars adhere to the law, but a lot of human drivers don’t, especially after the first few months of getting their licenses. Once self-driving cars become the norm, the roads will become much safer because the vehicles on the road will be making decisions based on algorithms abiding to the same laws, not based on variable human instinct.

With technology becoming more and more advanced, I think these self-driving cars will soon be able to communicate with each other, further ensuring safety for everyone on the road. So, if a car starts to break, it will alert the cars behind it and prevent the tragic multi-car collisions that occur too often these days.

Besides increasing safety, self-driving cars will help traffic flow. For smaller cities like Grand Forks, that’s not a huge deal, but in places with major highway congestion, such as the Twin Cities area, a solution to the never-ending traffic would be embraced by all.

The other major reason why society will be hesitant in accepting self-driving cars is because of how expensive they seem to be. Although they seem to be unreasonably expensive now, as technology continues to improve prices will start to get lower.

I think that they will always be more expensive than normal, non-automated cars but when insurance is considered, the price for a self-driving car might appeal to much more people. Once the autonomous cars prove to be safer than human drivers, insurance companies will have much higher fees for human-driven cars than their much more advanced counterparts.

With more acceptance of autonomous cars, insurance charges, which any car-owner knows is a big expense, will become much more affordable. I think that this concept will play a big role in increasing the amount of self-driving cars on the road.

With the option of getting into an autonomous car in the future that promised increased safety and affordability, I am so excited to get myself a self-driving car in the next decade or so and catch some more sleep on the way to work every morning.

Jill Morton is an opinion columnist for the Dakota Student. She can be reached at [email protected]