There’s a North Dakota size gap in the WCHA 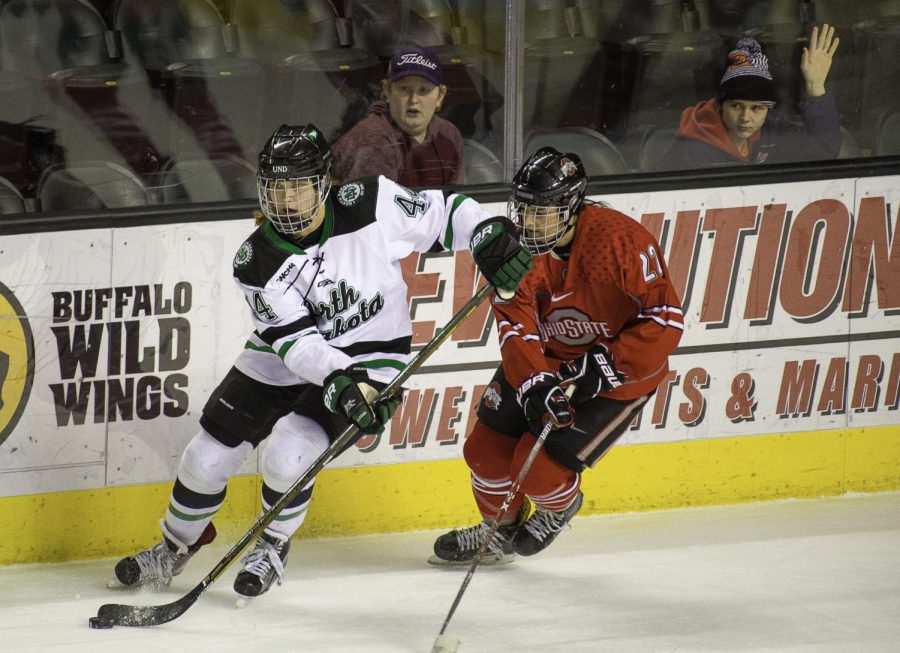 A year ago today, in the sparsely filled Ralph Engelstad arena, the Jumbotron game clock read 9:04 and counting. The Finnish standout freshman, Emma Nuutinen, opted not to pass to her teammate and took her shot on net, that shot would send her team into the seventh consecutive WCHA Final Faceoff appearance.

Today the Ralph Engelstad Arena is much quieter.

The off-white walls of the tunnels that lead athletes through the labyrinth underneath the concourse that were once filled with honors, photos, awards and memories now only reflect the unfortunate pot lights. With close observation you can see the holes in the walls where the screws that held up the framed memorabilia from the storied program. A program that was dissipated in such a poor manner that stunned the program, the fans, the community and those who dreamed of one day being on those very walls.

Now, a program of women divided across the nation get ready for different ends to their season, some of which have already come to a close, with no comfort from the idea that they may never be in the place of success they once were.

Mankato native Rebekah Kolstad finished her season this weekend with Minnesota State Mankato falling in two games to Ohio State. Mankato finished their season at the bottom of the WCHA standings 5-28-1, far from the 16-16-6 record she left at North Dakota. To add bittersweet insult to injury, Kolstad played against former teammate Charly Dahlquist, who scored in game one when Ohio State shut out the Mavericks 6-0.

At UND, Kolstad developed into a powerhouse player who wasn’t afraid to throw around her body to get the desired result. From the freshman struggle to her finally breaking into the player she is today, she credits much of this success to UND’s program.

“Being at UND for two years was the greatest decision of my life,” Kolstad said. “Freshmen year there was no doubt that I struggled with Hockey, the pace learning systems, and the expectations the coaches had of me. Sophomore year I finally felt confident in myself on the ice, I knew what I needed to do and I knew that I could do it. I was familiar with all my teammates and understood how they played which helped build chemistry between us. I knew how the coaches wanted me to play and what my role was and I was able to do it successfully.”

Since moving, the struggle has returned.

“After I committed to MSU I was very excited to continue playing and to be able to play in my hometown,” Kolstad said. “I was excited because I knew that I was a powerful collegiate player and I just finished an outbreak year for me personally, but when the season started it was very difficult to get in the swing of things. I felt like I was reliving my freshmen year, I was with all new teammates and coaches. I didn’t know what everyone expected of me or how the coaches wanted me to play. This season was definitely a struggle for me, but towards the end of the season I was moved onto a line with a couple girls, Tristen Truax and Hannah Davidson, and they made me feel like I was my sophomore self all over again.”

Having dealt with the struggle before, it is no surprise that she was able to adapt and become an even better player to carry into her senior season.

North Dakota’s talent may not be in green and white but they will be proudly representing UND in the WCHA Final Faceoff this year. North Dakota representation includes Patty Kazmaier award finalist, goaltender Kristen Campbell (Wisconsin) and forward Charly Dahlquist (Ohio State).

“It is a little strange though that last year at this time I was playing Ohio State to get into the Final Faceoff,” Dahlquist said. “This coming weekend will be my third consecutive year heading to the Final Faceoff and not only that but I am the only one from my team that has ever gone to the Final Faceoff. Although I wish UND was still alive and I sometimes wonder “What could have been,” I am now apart of a team that is so special.”

Over on the east coast among a variety of other conferences, UND women’s hockey program orphans are either gearing up for playoffs or settling into their offseason.

The University of Vermont Catamounts have ended their season after being swept in the Hockey East tournament by Boston College. In that best of three series, junior defensemen Taylor Flaherty was ejected from the final game in the third period on a questionable call from the referee with a 10-minute game misconduct for checking from behind.

“Though the year did not end how we wanted at all, losing 6-1 in playoffs, I am grateful for this opportunity,” Flaherty said. “All the new people I have met along the way, and the new memories. They will never replace those made at UND but they are part of the next chapter.”

Flaherty’s journey at UND didn’t bring as much excitement on the ice that she would have liked but it was all the little pieces of North Dakota that made her chapter here, exactly what she anticipated and more.

“I loved my 2 years at UND and all of the life long friends and lasting memories I made there so when news broke that our team was cut I felt completely lost,” Flaherty said. “I was seriously considering hanging up the skates for good.”

But then, an opportunity arose.

“I thought those chances were gone and that no coaches out there would take a chance on a kid that didn’t have a huge role for the past two years,” Flaherty said. “That chance landed me at the University of Vermont in the Hockey East league.”

As for Nuutinen, she may have been celebrating a goal that pushed UND in the Final Faceoff but this year Nuutinen is making her return to American soil after her bronze medal performance at the 2018 Pyeongchang Winter Olympics with team Finland.

While there may no longer be a women’s program that takes residence in the Ralph, the spirit of North Dakota hockey now resonates within many programs around the nation.

This spirit may have lost its home but will never lose its pride and these women will forever bleed green.

Allyson Bento is the sports editor for Dakota Student. She can be reached at [email protected].