Making his return to the Ralph 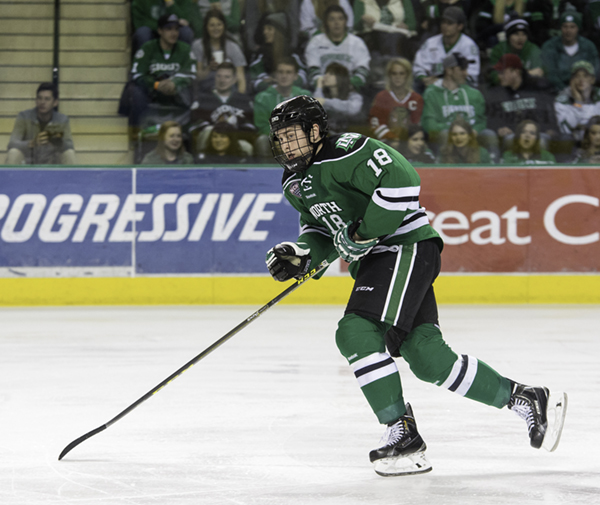 Former UND forard Chris Wilkie transferred to Colorado College at the beginning of the season and will have to sit out a year due to NCAA regulations.

Stepping into the Ralph for the first time is an experience most hockey players mark as their greatest memory.

It is the beginning of their journey with the University of North Dakota’s storied hockey program, and they get to be a part of it. A program that takes in few talented athletes and even then, it turns out not to fit all.

While the program took in transfer Nick Jones this season, the program also parted ways with a few players, including goaltender Matej Tomek and forwards Mike Gornall and Chris Wilkie.

While Tomek has found his place in the juniors playing for the Waterloo Blackhawks and Gornall has headed back out east at RPI, Wilkie has made a home out of a NCHC rival in Colorado College: A program that could use the skill and talent that Wilkie has proven to have.

Wilkie appeared in 62 games for the Fighting Hawks and was a freshman on UND’s 2015-16 national championship team. The 2015 Florida Panthers NHL draft pick  scored six goals and added 13 assists for UND, including one goal and nine assists in 30 games in 2016-17.

“I wanted to stay within the NCHC, number one,” Wilkie said. “I felt like the coaching staff and I created a strong relationship right away when we initially started talking, so that was a big factor.”

Colorado College will soon be home to two Wilkie’s, Chris and his younger brother Coltan, an opportunity Chris has never had being four years older than his brother.

“With my brother already being committed to Colorado College, he was familiar with the program and spoke highly of it,” Wilkie said. “I am excited to play with him in the next couple years here as well.”

While playing alongside his brother is the icing on the cake and the fit in Colorado was exactly what he was looking for, the brotherhood he developed in North Dakota is something that he is looking forward to returning to, among of some Grand Forks great attractions.

“Just seeing all of the guys again, it’s always fun to get back together with them,” Wilkie said. “And I’m also excited for Red Pepper.”

Wilkie’s return brings excitement to his former teammates, including some former roommates, Rhett Gardner and Shane Gersich. Wilkie’s absence is arguably felt most by these two not only as teammates, but roommates and best friends.

“It didn’t really hit until the last day of school that he was gone and he wasn’t coming back for the summer,” Gardner said.

“It was kind of a tough situation, he’s one of my best friends on the team and he was my roommate freshman year and last year, we were really close and it was tough but he had to do it for himself,” Gersich said.

A tough loss in and outside the program, but when asked who he’d pick to spend time on the ice with, Gersich and Gardner made that short list a true testament to how strong their bond is.

“We always had really good chemistry off the ice and on the ice. One game we played together freshman year and the first two shifts Wilkie scored on both shifts,” Gardner said. “I understand why he did it and I hope everything works out for him at Colorado College.”

While Wilkie won’t be eligible to play in this weekend’s game against UND, his former teammates are gearing up for the day that they see him on the ice in yellow and black.

“It’ll be a little bit different playing on another team for the last two years, hopefully I can give him a little body,” Gersich said.

Moving on to this new adventure in Colorado, Wilkie will always have memories that he holds closest to his heart that occured right here at UND.

“Winning it all freshman year, that is a memory that i’ll always cherish for the rest of my hockey career,” Wilkie said while reminiscing about being a part of the 2015-2016 National Championship team.

The adjustments have been long and tough and there’s something that UND’s program can’t get back and that’s a special attitude that Wilkie brings with him everywhere he goes.

“His laugh, it’s just contagious. He’s a funny guy and he’s just fun to hang out with,” Gersich said. “He’s a good kid, he has a good heart.”