How does UND measure up? 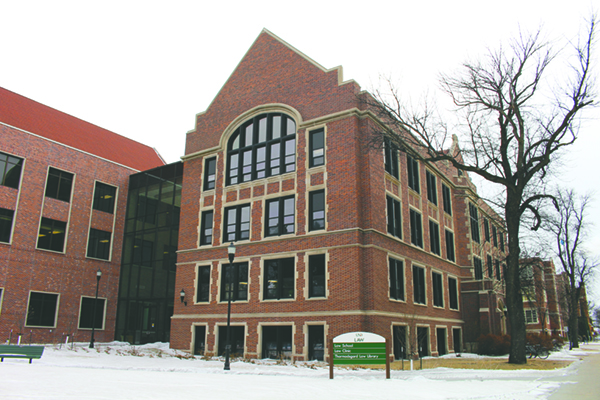 Sheilan Hamasoor has had an interest in law since high school, but it wasn’t until the news of the Trump administration’s immigration ban broke last year that she was sure she had found her purpose.

“I saw all of these immigrants trying to get into the country and denied whether or not they had visas or not and at that moment I knew I wanted to be one of those lawyers at the airport helping them,” Hamasoor, a child of Kurdish immigrants, said.

Law is attractive to students who have spent their undergrad years immersed in liberal arts classes geared toward critical thinking and communication skills, but the law school application process can be grueling and there are many factors to consider.

UND’s law school is one of the smallest nationally ranked law schools in the country, and its bar passage rate in 2017 was 72 percent. The Dean of the Law School, Kathryn Rand, said this number has been relatively consistent over the years, with a passage rate of 73 percent in 2016 and 76 percent in 2015.

Bar passage rates have been trending downward nationally, particularly in the multiple-choice portion of the exam. Hamasoor said that a school’s bar passage rate was one of her “main concerns” when deciding where to apply. This is a view Steven Miller, former UND undergrad and current law student at the University of Michigan, didn’t share.

“It’s not something that mattered that much to me,” Miller said. “You either pass it or you don’t.”

Of course, the University of Michigan Law School’s passage rate consistently hovers in the low 90’s.

For Miller, a more important consideration was the clinical positions available to students at the universities he applied to. Clinics at law schools provide benefits to two parties: law students looking to gain field experience and people who would typically not be able to afford quality legal assistance. The University of Michigan’s clinic focuses on juvenile criminal charges, and Hamasoor’s top choices all have immigration law clinics.

The UND Law School’s Clinical Education Program, which has fought for housing rights for domestic violence victims in the past, is currently on hiatus and is scheduled to continue that hiatus into the 2018-2019 school year.

“We’ve needed to do a little juggling to make sure we maintain quality with fewer resources, but I’m confident that we’ve done a good job with that,” Rand said, explaining how the School of Law has been handling recent budget cuts.

Perhaps the most unique thing about the UND law school is that it is situated in a unique place facing a variety of legal challenges in 2018.

“We have one of the lowest rates of attorneys per capita,” Rand said. “But also our state is largely rural so we have a lot of communities that are in need of lawyers and we’re working with the State Bar Association and the state courts to help encourage students to seek career paths in our rural communities.”

Hamasoor, active in UND’s relatively new Mock Trial organization, has had the chance to interact with a wide network of prospective and current law students, most of whom have advised her to look at schools in areas she would genuinely be interested in living in long-term.

“When you go to law school, you’re going to live in that city for the rest of your life,” Hamasoor said. “That’s what they usually advise you.”

Lisa Edison-Smith, currently practicing with Vogel Law Firm in North Dakota, said that when she was giving her son advice about where to go to law school, she suggested that he stay in-state if this is where he wanted to practice. Edison-Smith herself found it difficult to break into North Dakota law, even though she went to law school in Minnesota.

“If you’re a new attorney who’s trying to start a practice you don’t automatically have that peer group,” Edison-Smith said. “You just don’t have that network of connections. That was something that took me a longer time to cultivate.”

The law school was last accredited in 2014 after the successful completion of renovations to their building. Though the next accreditation hasn’t been scheduled yet, it will likely be 2021. Rand has announced that she will be stepping down as Dean in August. After nine years in the position, she is one of the longest serving law deans in the nation. Rand said that she has aimed to leave the school “in very good shape for new leadership.”

“The university hasn’t yet announced how it will handle the dean search,” Rand said. “But I very much hope they will launch a national search as quickly as possible.”