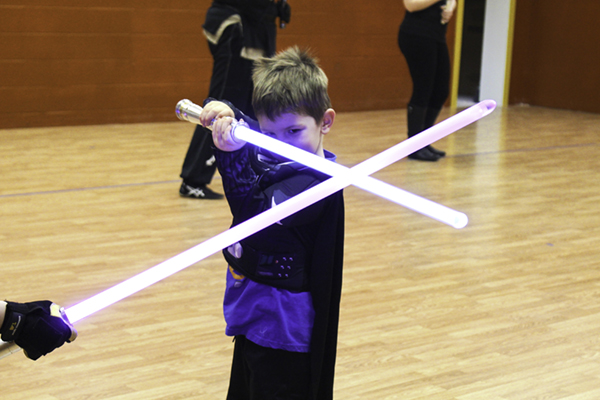 I felt as if I were stepping into an alternate universe as the hum of lightsabers met my ears.  I watched the lightsabers glow and dance as I waited for my first lesson in lightsaber combat to start. My son Liam, an avid Star Wars fan dressed up as Darth Vader, jumped into the fray with his blue lightsaber.

Liam was full of confidence and excitement. I was also filled with excitement but was extremely nervous. Then, I remembered the wise words of Master Yoda: “Fear is the path to the dark side. Fear leads to anger. Anger leads to hate. Hate leads to suffering.”

I have no time for such things in life, so I put any fear or worry aside and put my best foot forward, beginning my lesson at the Grand Forks Lightsaber Academy.

I had no idea what a Lightsaber Academy would be like and expected it to be all fun and games. But, as we began with stretches and a safety talk, I quickly reassessed my expectations. Lightsaber combat is much more than just waving lightsabers around at your opponent. This was serious training for real sport combat…with lightsabers.

Thomas Arntzen and Jennifer Hoffman run the Grand Forks Lightsaber Academy and teach the lightsaber training. They were extremely welcoming and the class was excited to have someone new join them.

Although Liam was not interested in learning the techniques of a Jedi, I was attempting to contain my excitement of having a “real” lightsaber in my hands and took things seriously. Liam contented himself with practicing on his own, occasionally sparring with some of the other students in the class.

Arntezen started the class by walking everyone through the blocks and attacks for Form 1: Shii-cho. Jennifer stood next to me, correcting my form and giving encouragement. My classmates pitched in with tips and created a fun atmosphere, despite the seriousness of the training. Training was taken seriously, with safety coming first and preparing students for future combat competitions.

After learning the different positions for blocks and attacks, we moved on to practice sparring. Jedi training is not for the faint of heart and is a lot harder than it looks.

Learning the positions was not hard and I thought I had things down pretty well. I was wrong. Putting everything together and having to move my feet at the same time was harder than I expected. Ludosport takes a lot of practice and dedication to master.

My training was quite the workout but was a lot of fun. I felt a little odd when we first started, as a person normally does when trying something new but I quickly become comfortable. Liam and I had a wonderful time, fulfilling our dreams of training with lightsabers and feeling like a real Jedi.

If anyone is interest in learning lightsaber training, I highly suggest the free class offered on Thursdays from 6 – 7:30 p.m. The instructors and students are extremely welcoming and nice.