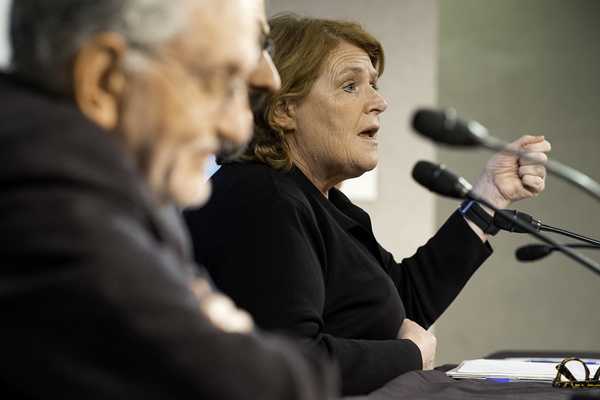 Senator Heidi Heitkamp speaks as part of a discussion panel of the "A Kennan Conversation: U.S.-Russia Relations and the Geopolitics of a Changing Arctic" event held at Clifford Hall on March 31, 2017.

While internet outages and connection problems are regular complaints amongst UND students, there is an even greater internet battle being fought in our nation’s capital.

Net neutrality has become a hot-button issue for many Americans, especially after the Federal Communications Commission (FCC) voted to roll back Obama-era regulations back in December.

Briefly, net neutrality is the idea that internet access should be regarded to similarly as access to water and electricity, where everybody pays for equal access. These regulations keep internet providers from either speeding up or slowing down certain websites that consumers want to access.

U.S. Senator Heidi Heitkamp (D-ND) is one of 50 senators supporting the restoration of net neutrality policies. The legislation, specifically, is a Senate resolution to reverse the FCC’s rollback of net neutrality. This resolution, if passed, wouldn’t be unable to be rolled back again by another FCC vote.

According to Sen. Heitkamp’s office, this legislation is supported by 50 senators: 49 Democrats and Republican Sen. Susan Collins of Maine. In order to pass, they would need one more Republican vote to flip.

“I think net neutrality is something not currently being debated, we would love to get it debated on the floor in the senate,” Heitkamp said. “But at the end of the day, when you look at it and say ‘how does this affect the future?’ What I would tell you is right now we have an internet that is equal to everyone and it means that everyone has the freedom to access it equally.”

This is not an anomaly. According to a poll conducted by the University of Maryland’s Program for Public Consultation and Voice of the People, 83 percent of respondents said they didn’t agree with the FCC’s decision.

Despite the overwhelming majority of Americans who support net neutrality laws, the before-mentioned legislation doesn’t have enough votes to pass. Heitkamp went on to explain where the disconnect is between ordinary citizens and those who vote on the hill.

Among her constituents, UND students have a variety of reactions to net neutrality and or its current place in policy priority.

“Before 2015, the internet grew and made a lot of progress, but there were issues of companies trying to take advantage of things back then,” UND student Shawn McHale said. “Verizon in particular was trying to see what they could get away with and get repealed from rulings the FCC made prior. This shows precedent that large broadband providers were trying to get away with more and push their boundaries.”

Meanwhile, Dylan Moser, another student, argued that the lack of net neutrality is what led to the internet boom.

“The internet grew exponentially without net neutrality,” Moser said. “The internet can exist without it. History have proven this.”

“You like Netflix a lot well you’re just in luck we are offering a special package for you from (insert ISP),” Marshal Will said, mimicking an internet provider’s sales pitch. “Just a $19.99 payment per month and we will give you super-fast connection to Netflix. Oh you like YouTube? We do too. With just a short installment of $9.99 we will give you super-duper speeds to that site. We hope you understand you have to purchase the deluxe package of $41.99 to access all of your favorite websites.”