Family day at the North Dakota Museum of Art 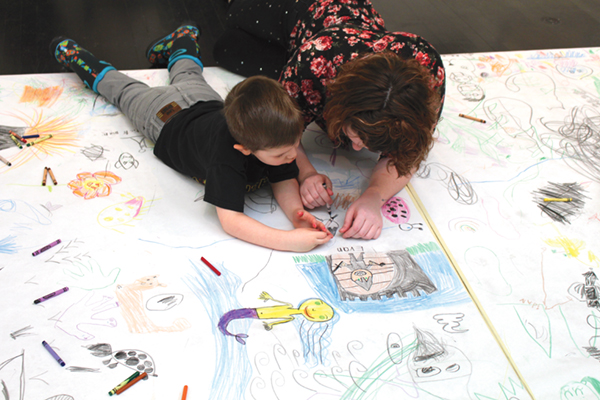 The North Dakota Museum of Art was filled with laughter from the families attending this month’s family day event. The event promotes art for our diverse community and is free to the public.

Since the event is not only the promotion of art but the promotion of community and family, I brought my son Liam with me. He was very excited to try everything and was thrilled to see one of his friends from preschool at the event as well.

The two friends quickly decided to color on two giant foam boards covered in paper for coloring. There were at least ten children with their families crawling all over the board and mural of a variety of crayon pictures and random squiggles covered the paper. The paper covered boards were large enough for multiple families to sit comfortably around them. It was the perfect low key activity for parents to interact with their children.

While Liam was coloring, he caught sight of some children who had made a jellyfish craft and decided that was what he wanted to do first. The table for the craft was crammed with children and their families. A kind volunteer helped us get some supplies and we took them to some clear floor space nearby. Liam chose to keep things simple. Overjoyed with his creation, he flew his jellyfish around, watching the tentacles flutter in the air.

Next Liam decided to make his very own puzzle. We found a seat among the other children at the table. The puzzles were made from the children’s drawings on paper cover stock. Liam drew an elaborate picture of a penguin house with a race track from the movie Cars on it.

After deeming his picture ready, he gave it to the volunteer manning the puzzle press. The volunteer put the puzzle cutter onto the cover stock and slipped it into the press. With the press right there on the table, children were able to see the mechanics of how their puzzles were made. When the puzzle was ready, the volunteer took it out of the press, made sure all the pieces had been properly cut and then slipped everything into an envelope.

Towards the end of the event, I spoke with Matt Anderson, Director of Education at North Dakota Museum of Art. Anderson told me that the museums Family Day event originally started as paid workshops for families. But, because of the high demand from the community the museum decided to make the event open and free.

With the event free, the museum relies on volunteers to help manage the events, which boasts 250 attendees on average. Anderson said there are about 15-20 volunteers per event. This event had volunteers from the community, students from UND and Phi Beta Phi Sorority.

Anderson explained that the events normally feature a local artist who decides the themes and assists with the crafts. Saturday’s event featured a local art nonprofit organization ArtWise, which supports art in the Grand Forks area elementary schools. ArtWise celebrated its 25th anniversary at the Family Day event.

Family Day at the North Dakota Museum of Art is a treasured event for the Grand Forks community. It celebrates diversity, art and community. The crafts at the event are not only fun for children, but allow parents to interact with their child in a low cost craft that they can easily do again and again at home.

Family Day shows that art does not have to be expensive or elaborate. It is the simple act of creating art with someone you care about, either in the community or in your own family, that makes art and Family Day so special.

Aimee Coons is an A&C writer for Dakota Student. She can be reached at [email protected]