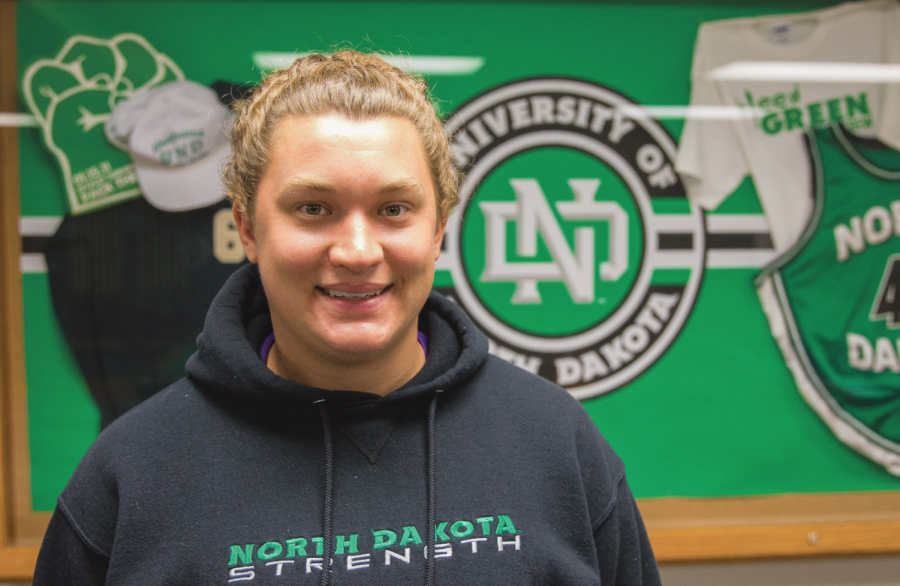 Molli Detloff is a thrower on the UND Track & Field team.

After spending the first week of January training an immense amount, University of North Dakota Track and Field rung in 2018 with the Thundering Herd Classic in Fargo on January 13.

The day was marked with many victories and place finishes across the board. The success at the Thundering Herd Classic is only the beginning for UND Track and Field this indoor season.

The women throws are led by returners Molli Detloff and Katelyn Weber. Detloff was an All-American in outdoor track last spring. Last Saturday in Fargo, Detloff threw 66 feet 4.5 inches in weight throw to break her previous school record by over a foot. Weber won indoor conference in shot put last indoor season and then placed fifth in the event in Fargo.

Head coach Kevin Galbraith considered Detloff’s throw the beginning of a very successful season for her.

“That’s a strong start for her and we expect her to just keep improving on that all season long,” Galbraith said.

The men throws are led by Adam Mehr, Tyler Kolander and Michael Quesenberry. Mehr and Kolander started off the season strong with fourth and fifth places in the weight throw, respectively. Quesenberry placed fourth in the shot put in Fargo.

The jumps feature Isabel Waite and Nolan Hovland in high jump as well as Kyley Foster in pole vault. Waite had a personal best jump of 5 feet 6.5 inches to win the event in Fargo. Hovland jumped 6 feet 8.25 inches to win the men’s high jump. Hovland also placed second at the indoor conference meet last year. Foster is coming off an indoor season where she placed third at indoor conference.

On the distance end of the track team, returners Hannah Oscarson, Erica Eades and Connor Danielson will be at the forefront. Both Oscarson and Danielson won the 3000 meter race in Fargo with personal bests. Eades ran a personal best indoor time of 2 minutes 17 seconds in the 800 meter race.

For sprints, freshmen Oluwaseyi Aguda, Shandon Toenies and Ethan Buckles are coming off great races in Fargo. All three made finals for the 60 meter dash. Galbraith is excited about the prospects.

“All of our runners had to run a pre-final, a semifinal and a final,” said Galbraith. “Seeing three freshmen make it to the finals is a great start for us.”

Finally, freshman Josh Pillath became the fastest freshman in UND history with his time of 8.33 seconds in the 60 meter hurdles.

The coaches and athletes are not letting early victories get to their heads. The main goal of the indoor season is performing well at the indoor conference meet in late February, but the focus of the entire track season comes in May at outdoor conference and potentially the regional and national meet for some athletes.

The strong start to the indoor season serves as motivation to continue the hard work in practice by showing that it pays off when the meet days roll around.

Track and field will be home at the UND High Performance Center on January 26-27 with free admission.