Basketball looking for a bounce back 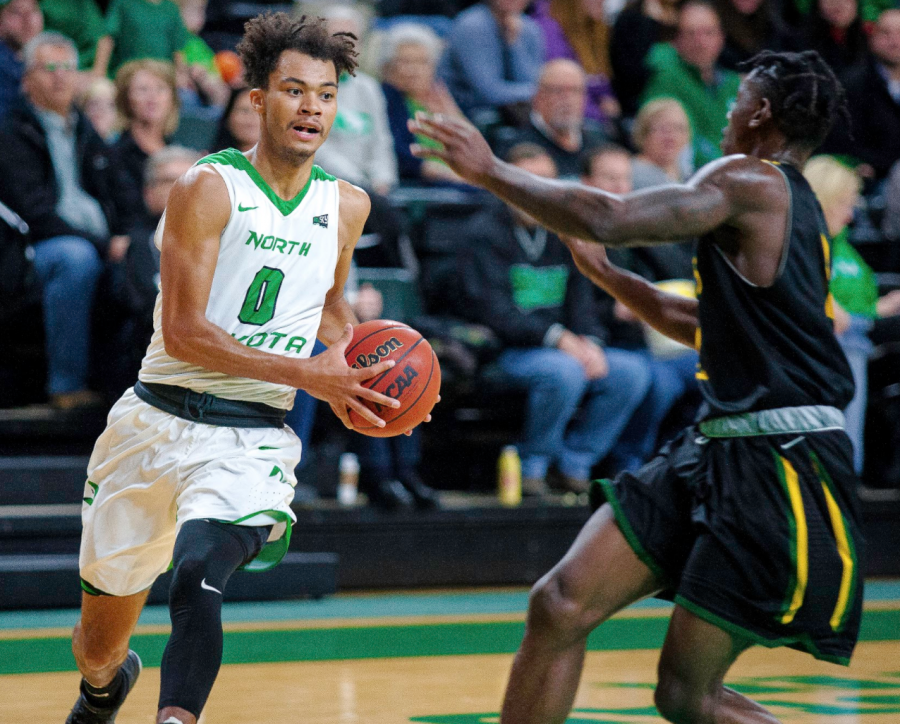 UND guard Geno Crandall drives to the hoop against Presentation College earlier this season at the Betty Engelstad Sioux Center.

With a less than fabulous start to the season, the Fighting Hawks Men’s basketball hope to improve come crunch time. Recent wins to conference teams, Idaho State, Weber State, and a win to non-conference in state rival, North Dakota State propel the team in the right direction.

“These last three games, I think you have seen the team we all knew we could be. It just took a little longer than we wanted to get there, but we’ll take it and continue to grow and get better,” Head Coach Brian Jones said.

The Hawks started the season with a 4-9 record through December leaving many questioning what could have happened in the off season following last season’s historic run to the NCAA Tournament for the first time in school history. Losing star player Quinton Hooker who averaged just under 20 points per game last season was a tough loss for the Hawks, Hooker now plays professionally in Poland. Fans wondered who would be able to step up and fill the void left by Hooker’s absence, and as of recent the answer has been Geno Crandall, Junior Guard from Minneapolis, Minnesota.

Crandall averages 16.3 points a game this season, leading the Fighting Hawks in scoring. Many had high hope that Crandall would be the much-needed replacement to the scoring void left from Hooker’s absence, and although the team record shows the slow start Crandall’s stats have been strong from the start. In the Hawk’s most recent game, an overtime loss at Northern Colorado on January 20, Crandall scored a team high 30 points, yet the team fell short after Northern Colorado scored a buzzer beater.

“The past few years, we’ve developed a bit of a rivalry with them,” UND’s Geno Crandall said. “It kind of competes with the NDSU rivalry. But these games mean more because it’s a conference game and last year we played them for a championship.”

In all, things are looking up for the North Dakota Men’s basketball team following the holiday break. As the Hawks advance in their conference schedule it will be interesting to see if the glimpse hope that we have seen of recent will remain throughout.