The secret lives of musicians 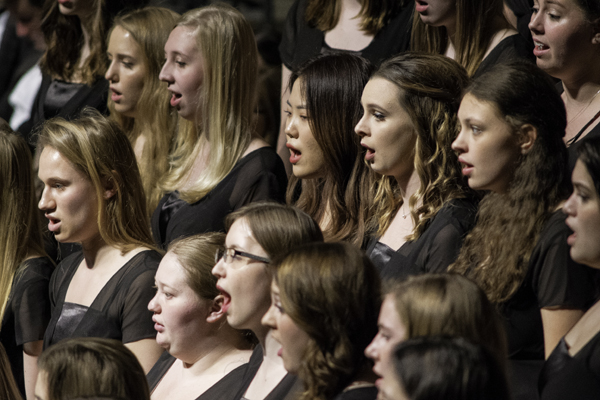 This past weekend, the UND Music Department was preparing for the UND Honor Band, Choir and Strings festival.

The festival opened with a showcase concert featuring performances from every ensemble the music department has to offer. Sounds of the caribbean and a jazz lounge rang throughout the Chester Fritz Lobby as the Steel Pan and Jazz Ensemble provided prelude music to the concert .

There was a mixture of smooth jazz and vibing steel pans flirting back and forth with each other, inviting the listener to be transported to another world. Audience members were invited to take a seat in the concert hall and were welcomed by Katherine Norman-Dearden, the departmental chair of the music department. She gracefully invited the audience to allow the music to touch their souls and enjoy what was to come.

The concert contained performances by the concert choir, wind ensemble, a piano duo, the women’s choirs and the chamber orchestra.

As a music student at UND, there are many different degree paths a student can take. The department offers degrees in music education, music performance, music therapy, and a bachelor of arts. The department also offers a graduate degree.

Michael Thompson is a junior music education major at the University. He is a member of the concert choir and is the student conductor of the Allegro Women’s choir. Choosing to become a music educator was an easy choice for Thompson.

“The idea that I can pass on the joy I get from music to the next generation is incredibly exciting,” Thompson said. “When one of my students accomplish a goal they set for themselves, it’s gratifying. There is no better feeling than seeing a student succeed.”

Helping students succeed is not the only thing Thompson is known for. As a voice primary, Thompson is preparing for a junior recital on January 28. This is a major accomplishment for Thompson because he will be premiering a song cycle that he and his collaborative pianist, Jonas Fisher, wrote together.  The piece is a form of expression on how the digital age has had on this world.

“It’s entitled ‘Digital Age’ and is an examination of the effect technology, especially social media and cell phones, has had on our world. Eight months of hard work have accumulated in a publishable work of music that we are excited to share,” Thompson said.

Composition is not just for music education majors. Matthew Lorenz recently graduated with a degree in piano performance, mathematics and is finishing his honors thesis. These degrees were not chosen by chance. Music and math have always been a part of Lorenz’s life. During his time here at UND, it seemed logical to combine his two passions and showcase through his compositions how music and math intertwine with one another.

“In my mathematics capstone class, I am doing a project through music but analyzing it from a mathematical perspective. I’m doing a composition with samples of whale sounds and applying twelve tone techniques,” Lorenz said. “If you look at the twelve tone technique, it has these mathematical groupings and structures that are amazing. Music has taught me about math and math has taught me about music.”

Music and math are not the only two things that go together. Cassandra Richtsmeier is a senior music therapy major and psychology minor. Within the past three years, she has had a placement at the University Children’s Learning Center. This placement is run entirely by music therapy students who are supervised by the director of music therapy.

“Kids, especially kids where english is not their native language, sometimes struggle to be part of a group. Music therapists are able to use music as a way to facilitate social interactions and help with language learning,” Richtsmeier said. “We can create a simple song that helps the child socially interact with their peers and connect simple words to an object, such as connecting the word cat to a picture of a cat.”

This semester, Richtsmeier is working with the physical therapy department using a treatment plan based on neurologic music therapy. She and another student are in charge of co-treating a client and gathering data for research. Music therapy is an interdisciplinary healthcare profession that works on helping clients achieve non-musical goals through music.

“Music therapy works with other therapies and when used together, brings better and faster results. When combined with physical therapy, music therapy makes the task more enjoyable and removeds the dryness of the repetition. The music is used to motivate, reinforce and cue the client through the use of timing and rhythm,” Richtsmeier said.

Music therapy is not the only music degree that can be found in the medical setting. Sara Zachmeier is working towards her bachelor in music with pre medicine as an emphasis.  She is involved in the wind ensemble and the pride of the north marching band. Zachmeier has started working in the healthcare profession and has witnessed how music and medicine are connected with one another.

“I’ve been working my way into the hospital and seeing music therapy being done by the therapist or even just the influence of music therapy on the patients has inspired me,” Zachmeier said.

Witnessing the influence that music has on clients has inspired Zachmeier to pursue research on music therapy and infants in a medical setting in the near future.

“I am trying to incorporate everything due to the limited time left with the program, yet it is exciting to see the connection between music and medicine,” Zachmeier said.

“My teacher was good friends with Dr. Drago. When Dr. Drago was looking for a violinist for the UND string quartet, I met Dr. Drago when I was in Prague. He asked if I was interested in applying and I told him that I was tied up with teaching and my studies. I then met the UND String Quartet and decided that I was going to pack up in Italy and come to the United states. I only had one exam that I needed to complete and was able to do that over the summer,” Auer said.

The concert on Friday was just a taste of what the music department has to offer. From composing new music to witnessing the power of music therapy in the hospital and rehabilitation centers, to making it possible for students to continue their education past an undergraduate degree, the students in the music department are not just musicians. They are individuals who are committed to making a lasting impact on the lives of the people who surround them.

Devon Abler is the A&C editor for Dakota Student. She can be reached at [email protected]