The dream in action 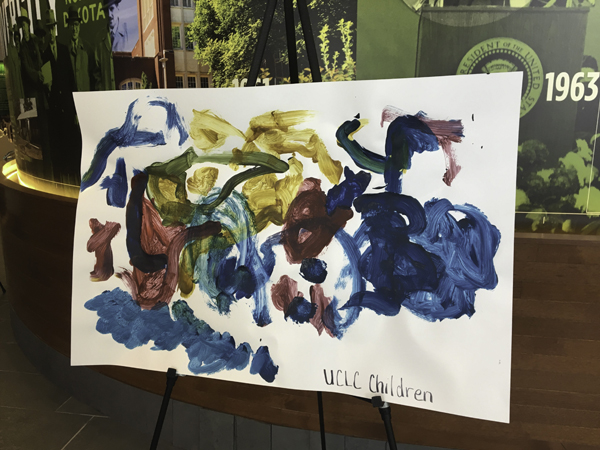 Art made by children at the University Children's Learning Center was on display at the Gorecki Alumni Center for Martin Luther King Day on Monday, January 15, 2018.

In true North Dakota form, January 15, 2018 had below zero temperatures and freezing winds. However, the daunting weather conditions did not stop the community of Grand Forks and the students of UND from gathering at the Gorecki Alumni Center to celebrate Dr. Martin Luther King Jr.

As the community gathered for the event, guests viewed artwork by children from the University Children’s Learning Center, a portrait of Dr. King by Daniel Lucas and listened to the soft tones of Mila Drago on the harp.

Before the program started, I spoke with Queen Ngale, President of the Black Student Association (BAS) and a coordinator of the event. I asked her what it meant to be working on such an important event. Her response was truly inspiring and passionate.

“Dr. King’s work paved the way for me. His work indirectly and directly changed my life, allowing me the rights I have today, allowing me to go to school and so much more,” Ngale said.

Stacey Borboa-Peterson, Associate Vice President for Diversity and Inclusion and a coordinator of the event, told me the event was important because it created a “collaboration between community, school, city and the students at UND to honor Dr. King and the work that he did.”

President Kennedy opened the event with his speech, giving the guests something to think about: “Why do we have Martin Luther King Jr. Day?” President Kennedy spoke of how MLK Day does not only honor a great man who fought for equal rights and inclusion, but offers the community a time to reflect on the “idea that we’re not only equal but one.”

President Kennedy closed his speech by speaking with pride of UND and how at UND we are one and we aim to “work beyond the classroom, for today’s students and tomorrow’s leaders.”

Tamba-Kuii Bailey, Assistant Professor at UND, took the stage for the keynote address. Bailey’s speech was inspiring from the start, giving everyone encouragement to keep standing up for equality.

“Dr. King’s legacy demands that we do his work not as some static point in our world’s history made up of old speeches and demonstrations but we must view his legacy as a shining beacon of light, calling us to action from the shores of freedom, liberty, social justice and human rights for all,” Bailey said.

Bailey urges us to use Dr. King’s work as a “living call to action,” to act tirelessly in the face of social injustice and help provide a space for those to tell their stories and validate their experiences. Bailey quoted Frederick Douglass “there is no progress without struggle,” encouraging us to continue Dr. King’s work, despite the hard times and struggles we may face.

It is our job to continue Dr. King’s legacy and “build a better community and society together.”

Bailey’s speech was met with thunderous applause and everyone who had the privilege to hear it, myself included, was filled with renewed vigor to continue to stand for equality and inclusion despite any resistance or struggle we may face.

Mayor Michael Brown was unfortunately unable to be at the event due to a prior event at the hospital. Thankfully, Pete Haga, the Mayor’s Representative, was able to step in and deliver a message from the mayor. Haga thanked everyone on behalf of Mayor Brown, the city council members, Danny Weigel and Bret Weber, who were also in attendance and all the coordinators who he worked with on the event.

The mayor’s message spoke of how the city of Grand Forks and UND work together to “ensure the community is welcoming and inclusive to all.” Mayor Brown reminded us that there is “still work to be done and that inclusion is not a one time commitment.” He encouraged us, as President Kennedy and Bailey did, to continue Dr. King’s work and to act in the face of injustice and to be “leaders in action.”

Mayor Brown announced that at next year’s event the city of Grand Forks and UND will be introducing “The Dream in Action Social Justice Awards.”

“These awards will recognize individuals who demonstrate courage and leadership, compassion and vision, thoughtfulness and action and pursuit of achieving, protecting or advancing the opportunity of community members,” Brown said.

Closing the event were musical selections from Susy Ngale and the Grand Forks Children’s Choir. Susy Ngale sang “Rise Up” by Andra Day. The song embodied the spirit of the event and all the encouragement given that day. Ngale’s bluesy powerhouse vocals rang forth, stirring the spirit and lifting the heart. Her performance would have made Ella Fitzgerald and Etta James proud. She was met with a standing applause and several audience members had tears in their eyes.

The Martin Luther King Jr.: The Dream in Action Event was truly an inspiring and wonderful event.

Aimee Coons is a staff writer for Dakota Student.She can be reached at [email protected]