UND to face Minnesota in first round of NCAA Tournament 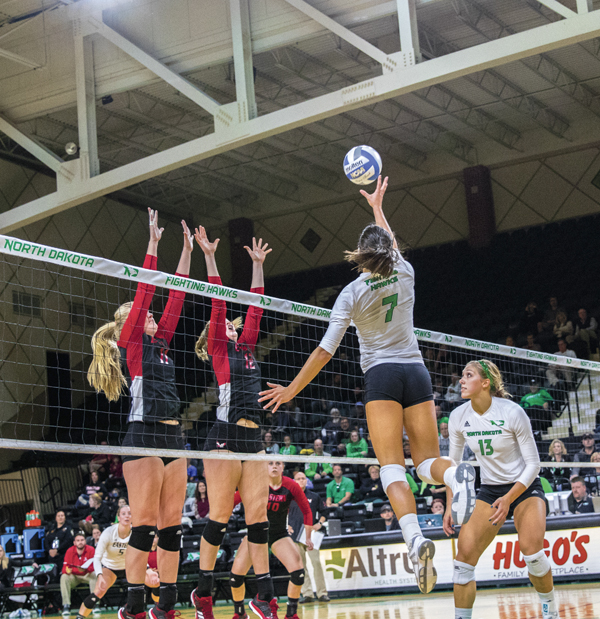 Senior outside hitter Tamara Merseli jumps for a shot earlier this season at the Betty Engelstad Sioux Center.

After beating the number one seed Sacramento State in five sets in the Big Sky Championship game, the North Dakota Women’s Volleyball team was named Big Sky Conference champions. The conference title results in an automatic bid to the NCAA national volleyball tournament.

During the NCAA Selection Show on Sunday, Nov. 26 it was announced that UND would be playing Minnesota in the first round of the tournament. The game will be held on Friday, Dec. 1 at 8 p.m. in Minneapolis, Minnesota. The University of Minnesota is ranked seventh coming into the tournament while UND is unranked.

Last year at this time, Minnesota beat UND in the first round of the NCAA tournament. In 2016, Minnesota was ranked second and it was UND’s first time competing in the national tournament. UND put up a solid fight but ended up with a 3-0 loss.

However, with some experience under their belts, head coach Mark Pryor believes the team has what it takes to do some real damage on the national stage. Success is becoming an expectation for the volleyball program here at UND rather than an ambition.

“Our goal since January of last year was to send somebody home in December (in the NCAA tournament),” Pryor said. “It’s not going to be easy, but hey, nothing this year has been easy.”

After some losses in the regular season seemed to set the team back, UND was able to show up for the Big Sky Tournament ready to play. A loss to Montana State in late October was what the team needed to shape up and get ready to take on the rest of the season.

“I think everyone realized it was going to be much more difficult to repeat conference titles than it was to do it once,” Pryor said.

The doubts were soon proven false when the team went undefeated in the conference tournament. The team stepped up to the plate and took down Sacramento State’s 11-match home winning streak to take home the tournament victory.

Following the game, Jordan Vail, Sydney Griffin and Faith Dooley were named to the All-Big Sky Tournament team. In addition to that, Faith Dooley was named the tournament Most Valuable Player for the second year in a row.

Even with these stand-out players, Pryor continued to emphasize that the main reason for the team’s success was not in the individuals but it was due to balance.

The team continues to build on its successes and improve together. Rather than being satisfied with their achievements, they have been setting loftier goals and chasing after them

“The progress from where we started to where we are now is outstanding,” Pryor said.

Pryor is finishing up his fourth season as the head coach of UND. He is currently 103-39 during those four seasons. As if that wasn’t impressive enough, the team has won 56 games just in the last two years.

Faith Dooley has been waiting since last season to return to the NCAA tournament.

“There were times this season it seemed like it was impossible,” Dooley said. “But we pushed through it and I’m so excited to get back.”