Psychedelics in the dorms

The story of one wild residence hall, one acid tab and one shattered life 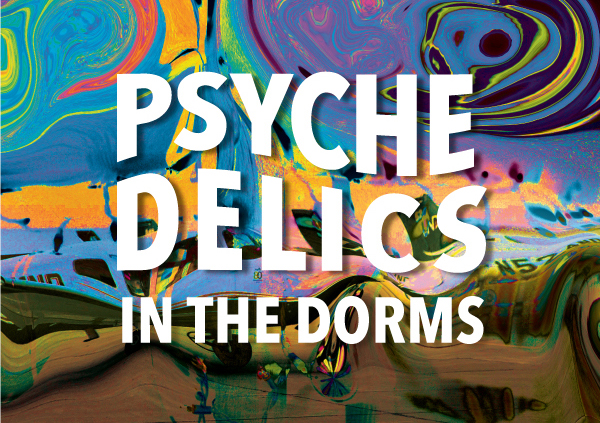 On a fateful night near the beginning of the 2016 spring semester, Parker Ellis laid in the hallway of Bek Hall waiting for God – in a figurative sense, and, for him, in a very tangible sense as he was under the influence of LSD.

Ellis had been a typical, straight-laced aviation student. He had successfully finished his private pilot’s license in his first semester, and had begun working on his instrument rating. He was also looking forward to a high-achieving future with the University of North Dakota Flying Team. The stress of all this, however, took a toll.

Ellis didn’t often partake in risky behavior. He rarely drank and never so much as touched tobacco. Despite his general self-discipline, his surroundings offered constant temptation. In his time there, Bek Hall had a definitive party culture.

“Everybody knew everybody in Bek,” Ellis said. “It was like literally a town in there and it seemed like everybody was just there to party and do drugs (…) and have sex.”

Ellis’s friend, a fellow aviation student and resident of Bek Hall, “Charlie” (who wishes to remain anonymous) said he felt the tone was set in Bek by a large contingent of residents who were involved in Greek life.

“They would always come back drunk or with booze and just be pretty crazy, you know?” Charlie said. “The party continued when they got back to Bek. And it just sort of like, always encouraged people to kind of get loose – especially the freshmen who were like me. We didn’t rush; we didn’t get invited to parties. But we saw a little snippet of it when they got back. It made it ever-present in our minds.”

In trying to accurately capture a typical weekend in Bek, Charlie recalled one night when “one kid who had eaten a pot brownie that was crazy strong (…) was so stoned he couldn’t move. We had two kids on LSD, running around, tripping balls. I think Parker and I were on cough syrup (…) and pretty much everyone else was drunk, or stoned or both.”

Cough syrup was Ellis’s first foray into mind-bending substances. It had been suggested by another Bek resident and become popular among Ellis’s friends. Many over the counter cough syrups contain Dextromethorphan Hydrobromide, which has hallucinogenic properties in high doses.

“You know – it’s just, it’s easy,” Ellis said. “It’s an easy excuse. If you get drug tested for it, you know it’s like, ‘Well I had a cold so I took Robitussin. That’s why it’s in the system.’ I don’t think anyone would nick you for that.”

Ellis had taken cough syrup once or twice before becoming interested in the prospect of LSD, which was sold by someone in the dorm. The appeal of LSD was the same as the appeal of cough syrup: it would not show up in the random drug testing conducted by the aviation program, and thus not put Ellis’s career path in jeopardy.

“That’s why I went for that rather than weed,” said Ellis. “Because weed shows up. Acid doesn’t. So for me, it was always like, “How can I have the most fun without suffering serious consequences?’”

Kal Datz, President of the UND dual-chapter Psychedelics and Students for Sensible Drug Policy Club, said this casual treatment of LSD as a lower risk drug is typical of young people who have only done cursory research into it.

The overdose risk is low in LSD, and it’s true that it will not show up in a standard drug test. However, there are still risks, particularly if the “LSD” is actually a different chemical compound entirely. LSD is difficult to synthesize, which leads to cheaper and easier alternatives being passed off as the real thing.

In the last few years, a chemical called 25INEOME has been especially prevalent in the Grand Forks area, being passed off as LSD unknowingly by dealers. It’s impossible to know whether the substance Ellis ingested that day nearly two years ago was LSD in its purest form, but what is clear is the twelve hours that followed were a wild ride for Ellis and those around him, and would ultimately change the course of his life.

Ellis and Charlie had initially bought LSD together and planned on taking it together as well. However, Charlie had obligations when Ellis had a free day, and he decided to take it alone. Ellis describes the first five to six hours of his trip as “one of the best experiences of (his) life.” Things began to go downhill quickly, however.

The next several hours were filled with paranoia, as Ellis describes an endless cycle of napping, wandering the halls of Bek and feeling judged by the friends and roommates around him. Eventually, the trip took a religious turn when Ellis became convinced that he had died.

“I thought I was in purgatory because I was in the same dorm,” Ellis said. “I’m not in heaven, I’m not in hell. It’s not hell, but it feels like it kind of, but it’s not like hell-ish. (…) Time wasn’t moving so I was like, ‘I’m in purgatory.’ I grabbed my Bible and I held onto it.”

It was at this point that Ellis began his hallway vigil, waiting for God.

As the hours progressed, Ellis became increasingly depressed and anxious. He began to try to leave Bek, only to be dragged back in by friends anxious about being caught. The culmination of the trip was his running back and forth between the dorm and a nearby church, believing that if he could convert those around him, he would redeem himself and escape purgatory. He was loud, and, according to Charlie, yelling religious verses up to the sky and harassing groups of party-goers on University Avenue. The cops were called in the confusion, possibly by a resident advisor, and Ellis was arrested.

In the proceeding weeks, Ellis was put on a two-year flight suspension by the university. He had to quit the Flying Team. His Federal Aviation Administration (FAA) Medical Certification, which every pilot needs to legally fly, was revoked due to his drug usage. He could stay and attend classes if he wished, but since he would no longer be able to pursue aviation, it was more economical to move home to California and earn his credits at a community college. He felt as though he had lost everything.

“I was like, ‘What the fuck do I have waiting for me at home?’” Ellis said. “My dog and an application to community college. And I had all this stuff left on the table that I had lost in a period of two days.”

It’s a dramatic story of one poor decision gone awry – a cautionary tale for any student looking to party with no consequences. At the heart of it is one young man who seemed to his friends and acquaintances to be the unlikeliest victim. It would be difficult to say what influenced Ellis’s decision the most: the overwhelming stress the rigorous UND aviation department can put on students, or the toxic dorm culture that encouraged casual use of serious drugs.

“One thing that was brilliantly kind of ironic and sad was as a freshman, you were required to live in the dorms,” Charlie said. “And I don’t think Parker or I wanted to be there. And we probably wouldn’t have been there and we wouldn’t have been exposed to all this. (…) Parker’s life wouldn’t have been screwed up if he hadn’t been required to be in the dorm.”Today, things are looking brighter for Ellis. He has been regularly going to see an Aviation Medical Examiner (AME) and has been passing twice-monthly drug tests for 16 months. So far, he has appealed to the FAA to reinstate his Medical Certificate twice and been denied both times due to the nature of the LSD incident, but he hopes his upcoming attempt, which his AME is filing this month, will be successful. He should hear from the FAA by February.

Though the legal process has been fraught, Ellis says he never once thought of giving up on his dream of being a pilot. In fact, he even claims he has no regrets about his past actions. Though the initial loss was shattering, he says he thinks it gave him life experience and wisdom that he might not have gotten had he followed the straightforward path set out for him by UND’s rigid system.

“I would say everybody in aviation that doesn’t go out and party, that doesn’t go out and do drugs, that hasn’t gone to jail and hasn’t paid the price, is someday going to hit 25 or 30 years old and they’re going to make a decision like I did and they’re not going to know the price of it,” Ellis said. “And when you’re 30 and set in a career, it’s a lot more devastating than when I had taken it. (…) So I learned the lesson young. I learned that lesson the hard way.”