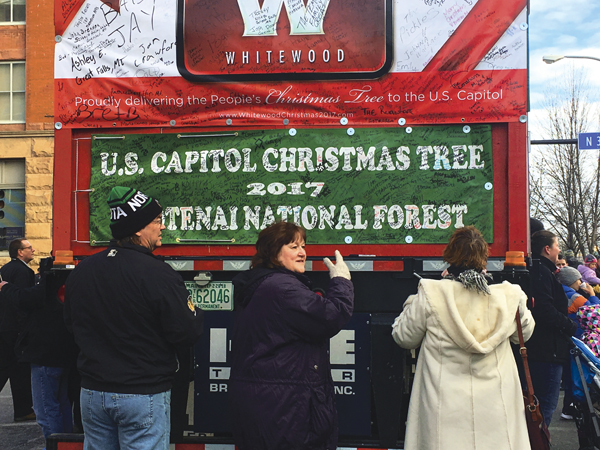 People sign a card accompanying the U.S. Capitol Christmas Tree during a stop in downtown Grand Forks on Sunday morning.

Grand Forks had an unusual visitor stop by on Sunday. A portion of downtown Grand Forks was blocked off to make room for the Capitol Christmas Tree, also known as the people’s tree. This year the tree was harvested from Kootenai National Forest, located in the northwest corner of Montana. This tree will travel over 3,000 miles before reaching Washington, D.C.

Moving a tree is no easy feat. Larry Spiekermeier, a trucker from Plains, Montana, has been hauling goods for over 49 years. He was chosen to transport the tree from Montana to Washington, D.C. due to having the highest safety record for the past 16 years and recognition of being the Montana state driver of the year in 2009 and 2015. He also reached the “One Million Mile Club” in 2015, logging 1.6 million accident free miles.

“This is the crown jewel of the driving career right here,” Spiekermeier said. “Whitewood (trucking) has an excellent driving safety record for the past 18 years and I have been honored to be a part of it.”

An 80-foot Engelmann spruce, the tree was decorated with ornaments and encased within a trailer for protection against any damage before reaching the capitol. The tree was harvested not with a chainsaw, but with a traditional crosscut saw. According to capitolchristmastree.com, this is a process “officials say has never been used before to cut down previous national trees.” Montana decided to harvest the tree in this nontraditional way to honor the history of the lumberjacks.

Members of the community gathered around the trailer, signing the banners that hung down its sides.

“The tree has a name: Lady Elaine,” Spiekermeier said. “The ornaments that are on the tree right now are just for show, but there is a truck that is carrying 13,000 ornaments going down there and we will put them on the tree when we reach the capitol.”

Lady Elaine will make about 20 stops in six different states before arriving at Joint Base Andrews. She will then be delivered to the U.S. Capitol and be on display outside of the Capitol building. Making the journey from the far end of Montana to Washington, D.C. is rather time consuming.

“We started the drive four days ago. It takes about two weeks with all of the stops because this is for the people,” Spiekermeier said. “We are set to arrive in D.C. on the 27th. This is the people’s tree and for the people of America.”

This was an exciting event for the community as well. Families brought their children to see the tree, meet the trucker and write wishes of good tidings to the president.

The Grand Forks Police Department was present at the event wearing Santa hats and passing out candy to the children. Corporal Dan (last name omitted by officer’s request), a member of GFPD, spent the morning mingling with the community.

“This isn’t just a tree,” Dan said. “This is the Capitol tree. The GFPD is here to spread some Christmas cheer and mingle with the community. One of my favorite things about my job is helping people and getting to know them through events like these.”

The children were certainly excited to see the GFPD department handing out candy and dressed in Santa hats. Vendors were also present in the town square handing out doughnuts, hot chocolate and coffee to the observers. Lady Elaine left Grand Forks at 10 a.m. and continued on her journey to Washington, D.C. Her next stop will be in Springfield, Missouri on Nov. 21, Poplar Bluff, Missouri and Paducah, Kentucky on Nov. 22, and finally reaching Joint Base Andrews on Sunday, Nov. 26.  Check out capitolchristmastree.com or follow the U.S. Capitol Christmas Tree on Facebook.

Devon Abler is a staff writer for Dakota Student. She can be reached at [email protected]