Saturday’s are for the boys 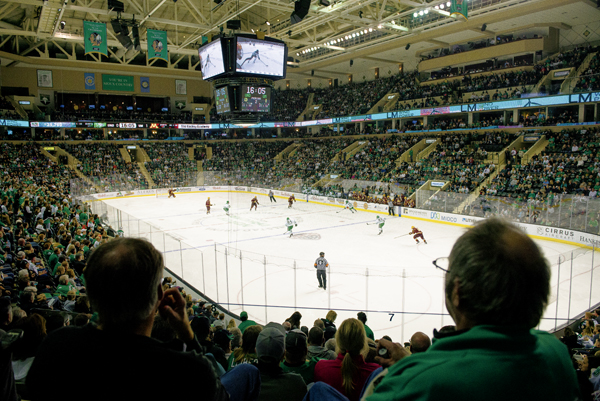 Fans in the Ralph Engelstad Arena watch the UND Fighting Hawks take on the Minnesota Gophers on October 20, 2017 after waiting six seasons since the arch rivals last matchup.

The University of North Dakota Men’s Hockey team has been a top program in the nation for almost its entire existence. The commitment to consistency and excellence sets the program apart from the rest of the teams.

While North Dakota has been consistent over the years, the team seems to have a stigma of being a Friday team more so than a Saturday team. Meaning, North Dakota has performed better on Fridays compared to Saturdays.

Many fans have thought that it has been an odd year this season, with North Dakota performing seemingly better on Saturdays compared to Fridays.

In the 2014-2015 season, North Dakota performed significantly better on Saturdays than Fridays. North Dakota went 10-6-1 during Friday games and 15-1-2 during the Saturday games.

In the 2015-2016 season, the National Championship season, North Dakota dominated both nights consistently, but still ended up performing better on Saturdays than Fridays. North Dakota ended up going 13-3-2 during Friday contests, and 15-2-1 during Saturday games.

During the last season, the National Championship hangover season, North Dakota ended up being mediocre on both nights throughout the season. North Dakota went 8-6-2 on Fridays, and 10-8-1 on Saturdays.

The stigma of North Dakota being a Friday team more so than a Saturday team has been going on at least since I have personally been at the University of North Dakota, the 2015-2016 season.

After splitting the opening NCHC series with Colorado College, Head Coach Brad Berry had a say in the Friday’s performance versus Saturday performance argument.

“It’s driving us crazy,” Berry said. “It’s not like we don’t prepare for Friday nights. It’s one of those things where teams come out very hard on Friday night. We’ve got to make sure we do all the different things that give us a chance for success.”

Kyle Kinnamon is a sports writer for Dakota Student. He can be reached at [email protected]