Logan’s run to the top 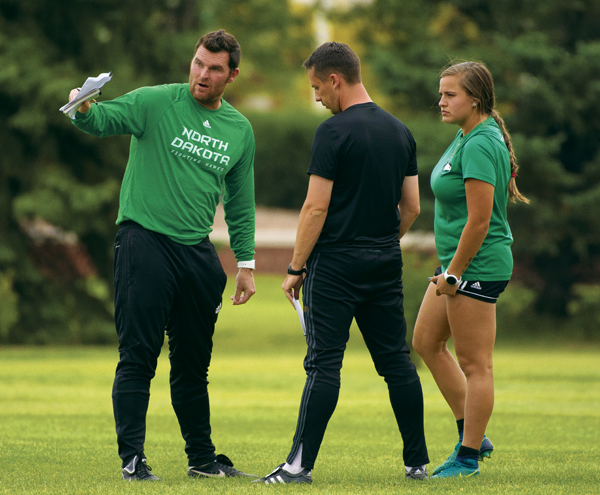 Logan is the first coach in program history to earn conference Coach of the Year at the Division I level and it’s clearly well-deserved.

Logan led the women’s soccer team to one the most successful season they have seen since the program moved to Division I.

The team improved its record by four wins compared to last year as they finished up 6-8-4 overall and 4-5-1 in the Big Sky which is the best of the program since joining the Big Sky in 2012.

Although the team just barely missed out on postseason play, Logan has a lot to look forward to in years to come. The team is returning all three of the All-Big Sky Conference selections of Catherine Klein, Katie Moller and Emma Contino.

Sophomore Catherine Klein was named 2017 Big Sky Conference goalkeeper of the year, while junior Katie Moller forward was named All-Big Sky First Team. This marks the first time UND has had a player on the Big-Sky First Team, and with Klein and Moller together, this also marks the first time in history at any division that UND has placed two players on the first-team roster in the same season. Junior defenseman Emma Contino was all named All-Big Sky Honorable Mention.

The successful season was in direct correlation with the coaching change of hiring Chris Logan. The team’s success makes him a popular selection for conference coach of the year.

Early in the season, sophomore Karleen Yapello had a positive take on Logan and the upcoming season.

One of the things that Logan emphasized most in his team was the belief in themselves and their teammates that they were able to achieve great things if they put their mind to it. In short, belief goes a long way.

“I think making sure the environment is one that allows people to flourish is a good starting point to allowing the program to progress and become more competitive,” Logan said. “Longer term hopefully this ideology of believing in yourself leads to greater success on and off the field.”

The shift in mentality is making great changes on and off the field. The players growing together as a team led to a better record. Based on the 2017 Big Sky All-Conference Team, this was recognized on the field and on the sidelines. The Coach of the Year selection is peer-based and the coach of the year award is not one that is taken lightly.

The team and Logan are looking forward to achieving even greater successes in the seasons to come.