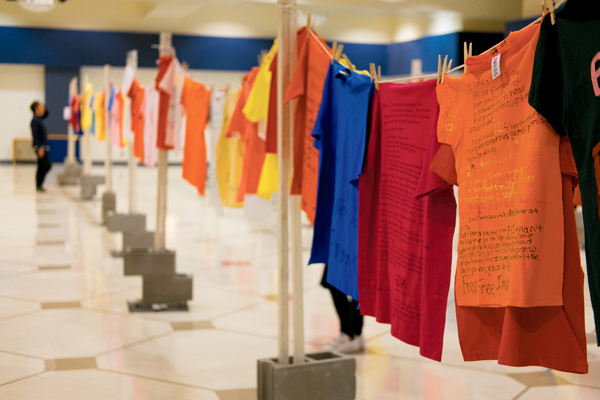 Open for viewing from October 23-27, 2017, the Clothesline Project displays t-shirts made by victims of abuse

First initial used to protect the identity of the survivor.

The Clothesline Project was present on the University of North Dakota campus during the week of Oct. 23 to 27. The Memorial Union Ballroom was filled with shirts, each one representing a different story of violence against women. The original international project started with 32 shirts hung in Hyannis, Massachusetts in October of 1990. Since that time, over 250 projects have begun in communities around the globe with almost 30,000 shirts on display. The stories shared below are stories that were found on the shirts displayed this past week.

The purpose of the Clothesline Project according to the informational pamphlet provided by CAWS North Dakota states that it is here “to bear witness to the survivors as well as the victims of violence against women; To help with the healing process for people who have lost a loved one or are survivors of this violence; To educate, document, and raise society’s awareness of the extent of the problem of violence against women.”

The first clothesline project in North Dakota was displayed on Feb. 28 and March 1, 1995 in the great hall of the Capitol Building during the legislative session. There were 114 shirts on display at the time.

“He raped me. He hurt me physically. He ripped out my heart, he stomped it splat. My life was changed in two minutes flat. I told him ‘NO’ but he didn’t care – My body is mine and I will not share. He told me he needed it, that’s all that mattered. In one little instant, my life was shattered. The second it was over, he was dressed and gone. I was left trying to carry on,” P* said.

Before entering the room, there is a sign posted outside that requests students remain silent while walking through the exhibit. A gong is struck to indicate that a woman is being battered; a woman is battered about every 10 to 12 seconds in the United States. The whistle is blown to signify a reported rape; every minute of every day more that one woman is reported raped in this country. The bell is rung to indicate that a woman has died as a result of intimate, personal violence; in the United States a woman is killed by her batterer every 10 to 12 minutes.

In the back of the ballroom, there was a display bringing to light violence against native women. Pairs of earrings were displayed on a shawl along with letters written by the victims families. There are many women who have gone missing as a result of acts of violence and have not been found. The earring display is meant to bring to light this issue and as a way for families to express hope that they will be found and accounted for.

“You’re a survivor because every day you make a choice not to be governed by the harsh words or actions. No one has the right to take away your happiness,” Y* said.

While it’s difficult to experience these harrowing stories and read through each and every one of them, it’s important to honor these stories of violence against women and work towards a safer tomorrow for future generations.