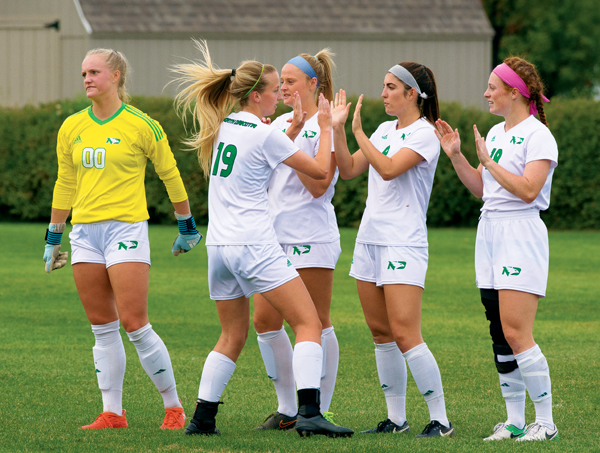 UND soccer defender Erin Svensson (#19) cheers with her teammates prior to a home match against Idaho State on September 22, 2017.

As the University of North Dakota women’s cross country team prepares to toe the line of the Big Sky Conference cross country meet in Ogden, Utah this Saturday, there is a very different look to the conference roster than anyone was expecting coming into the year.

Approaching the cross country season in early August, three of the top five returners were out with some sort of injury. In addition to that, one of the incoming freshman expected to fill the varsity roster, Lydia Kantonen, was also sidelined with an injury.

The normal healing time for a stress fracture varies anywhere from six to eight weeks but they can persist for much longer than that.

Kantonen tested negative for any sort of stress fracture or reaction so the trainers were treating her injury as a muscular injury.

The other top returner, senior Alyssa Anderson, had been battling an injury since December and was already planning on sitting out the cross country season.

Despite the bleak outlook, head coach Richard Clay was expecting that Lydia, Erica and I would be back competing by early-October.

Early-October came and went without the return of Eades, Kantonen or myself. However, Eades and Kantonen were beginning to get their base mileage up and planned on returning for the home meet.

Although two runners were potentially going to be joining the roster, Clay was forced to look at the season realistically. He decided that I was going to redshirt and Eades and Kantonen were going to run unattached at the home meet so that redshirting would still be an option for them.

The conference meet, the most important meet of the season, was on the back burner for the time being. Clay had begun to look at the conference meet as just another meet where the team would have to focus more on individuals doing well than doing well as a team.

“Clay really adjusted the goals of the team after seeing everyone compete at the home meet,” Oscarson said. “He used to be very focused on how we could do well individually at conference and now it’s a lot more team-based. We should be able to perform well together.”

At the home meet, the Ron Pynn Invitational, the team was filled with nerves as the crowd was one of the biggest that the Ron Pynn had ever drawn.

The race started out as any other race had during the previous meets of this season. When the crowd of runners passed mile one, no one was racing out of the ordinary. Steadily throughout the race, the gap between UND’s first and eighth was getting smaller.

After seeing the results of the Ron Pynn Invite, Clay was able to look towards the conference meet in a new light. A majority of the top seven runners had run season-best times by 30 seconds or more. Including Kantonen, who is now going to be travelling with the team to Ogden on the conference roster after competing in only one race during the regular season and cross-training on the elliptical, bike or in the pool for a large part of the season.

The conference team now consists of: Hannah Oscarson and Janessa Meuleners, two of last season’s top five runners; Ellyssa Peterson, Lydia Kantonen, Kendra Franck and Amanda Robbins, freshmen on the team; Sydney Raboin, who was a transfer student on the team her sophomore year but did not compete on the team last year; Megan Olson, who did not make the conference roster last season.

Although the look of the team is different than was expected early pre-season, the runners are hoping to make a strong showing at the conference meet this weekend and place better than the team did in years past.

“I want us to run as a pack. After the home meet, our times are so much closer that that could now be an option,” Oscarson said. “Running as a pack benefits everyone, you just feel so much stronger.”