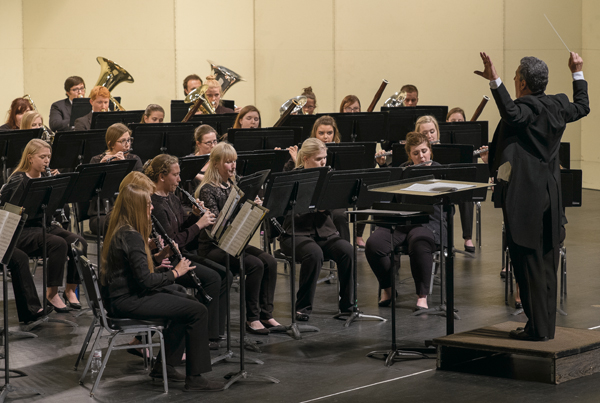 The University of North Dakota Wind Ensemble is an ensemble known for their musicianship. Having been invited to perform for various music education events throughout the state of North Dakota, this group has been selected to present performances at the 2001, 2005, 2008, 2011 and 2017 North Dakota Music Educators Association Conferences, the 2002 Inaugural North Dakota Arts & Humanities Summit, the 2006 College Band Directors National Association North Central Division Conference and the 2012 Western International Band Clinic. This ensemble performed their first concert of the fall semester on Tuesday night.

I have not attended a single Wind Ensemble concert. Instead, I perform in them. For students who have not had the opportunity to perform within a musical ensemble, let me share with you the experience through the eyes and ears on the stage.

Music is used to connect humans to one another, to express the soul and to bring to mind the ineffable. Coming together as an ensemble of 70 plus students, we all have the common goal of creating music to touch at least one person in the audience.

However, placing 70 people together in a room and commanding them to create music does not work simply. There needs to be a mastermind leading the ensemble with a clear vision.

“It is an honor to create music with this ensemble,” Popejoy said. “Having a vision, hearing it come to life and being able to tell a story without words is one of the greatest joys that I have being a conductor. At the beginning of the semester, we have a new group filled with new students. I like to say that the name of the group does not change but every year it is a new ensemble. Watching the group evolve throughout the semester is a rewarding experience.”

Ryan George titled one of the pieces performed by the Wind Ensemble Tuesday night “Firefly.” The piece was written for his two young daughters. He overheard one of his daughter’s say that the fireflies were not bugs, rather they were Tinkerbell coming to take her to Neverland.

Being presented with this piece had its challenges. How does one embody the spirit of a firefly when they play a tuba? I do not know. I play the oboe. Yet by following the conductors lead and working together as a group instead of individuals, audience members in the Chester Fritz Auditorium, if they listened close enough, could hear a child’s imagination running wild and could almost hear the fireflies flitting through the air.

The UND Wind Ensemble has another concert on Nov 29 at 8 p.m. in the Chester Fritz Auditorium. Tickets can be purchased at the door.