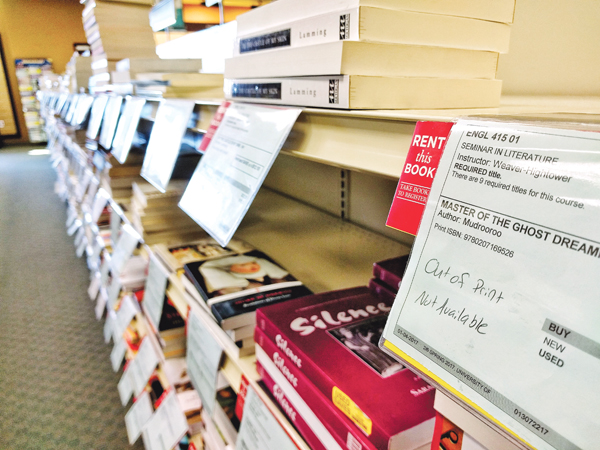 Some textbooks required for UND courses have yet to be delivered this semester.

Roughly two weeks into the semester, Provost Thomas DiLorenzo sent out an email that was described as “cryptic” by creative writing instructor Patrick Henry. The email was short, explaining that the bookstore was having procurement issues this semester for certain classes, but that the issue would be resolved as soon as possible.

Though students did not receive the email, many were already aware of the bookstore’s issues because they themselves did not have certain textbooks, or their friends didn’t or the email was addressed directly by instructors and professors in their classes.

“It sometimes is the case, and I’m not saying the provost is at fault here, but sometimes you send out an email with the purpose of just kind of assuaging any concerns, and that email creates more concerns than you might have had if you just left it alone,” English Professor Adam Kitzes said about the much-talked about message.

Kitzes himself did not have any issues regarding textbooks in his classes this semester, and says he has always had the utmost respect and appreciation for the bookstore and its employees.

Kitzes did add he believes that part of the recent trouble is there was a “mass exodus of employees in the textbook department.”

Patrick Henry, teaching his first semester at UND in the English department, has had several problems with students unable to access books for his classes.

“There’s a certain point where the Amazon and Google book previews just stop cold,” Henry said. “You know, when students email you at 9:30, 10:00 at night asking if there is any way you could get them the reading for the next day – no. It unfortunately can’t happen.”

Henry has taught at two other institutions. He says the process through which UND instructors communicate to the bookstore which books they need students to have is “pretty standard,” and he hopes “these types of procurement issues” are a “one-off scenario.”

Both Kitzes and Henry teach classes that require literary books such as novels or anthologies of poetry. Both have had experiences where certain specific texts were unavailable, usually because of distribution or publishing issues. What is more worrying about the bookstore’s recent slew of issues is that it was not only small classes with highly specific needs. Students enrolled this semester in English 110 and English 130, basic composition classes required for virtually everyone who attends UND, encountered many obstacles in getting their books.

“(There were) two main issues: telling people the wrong book, or an additional book that they didn’t actually need, and then just not having enough books on hand,” Academic Director of Composition Kim Donehower said.

Students in many 130 classes were told by the bookstore that they were required to have one of two of the wide variety of topical readers available for the class, instead of the one assigned by their specific instructor. On top of that, there were simply not enough readers in stock for the number of students enrolled.

Many students in 110 were not able to get the UND Guide to Composition, which the English department puts out themselves and stores extra copies of. Donehower was particularly exasperated by this problem because there were enough copies on campus, but there was not a communication channel between the bookstore and the English department to get these books to students promptly.

“We had to hear from students reporting to instructors that the bookstore said they were out of comp guidebooks, so then we had to call them and say, ‘You know, we have them. You just have to tell us when you need more. They’re sitting right here on this side of campus,’” Donehower said. “And so it seemed like tracking if there were enough books was not really happening that well.”

The issues related to textbook procurement are scattered and complicated; different professors and students are affected semester-to-semester. However, issues like the ones that have been plaguing the store recently have some faculty considering the benefits of using other channels offered by technology to get information to their students.

The Dakota Student will continue this textbook series by exploring online, open resource textbooks being used in lower level courses.