Night of Professional Wrestling at the Alerus

A non-wrestling fan gets his first taste of the WWE 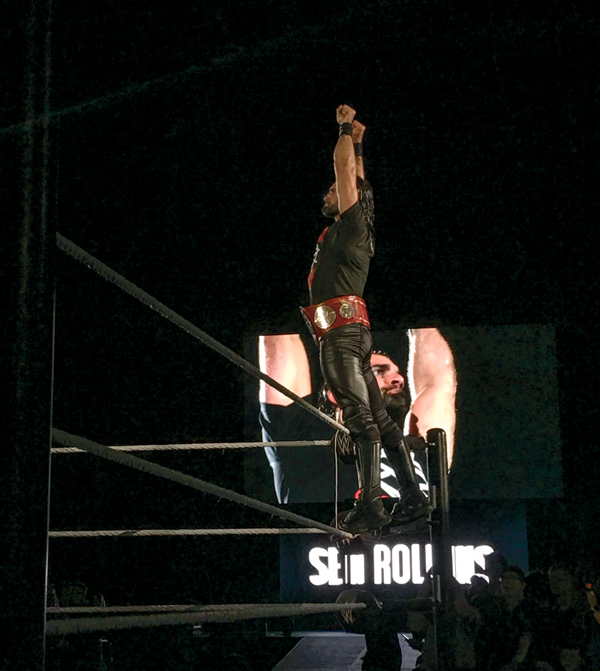 WWE wrestler Seth Rollins stands on the ropes during Friday's WWE event at the Alerus Center.

Torin Walhood never thought he would find himself at a World Wrestling Entertainment event in Grand Forks, North Dakota. In fact, he was only vaguely aware of what the WWE was when I called him on the afternoon of Friday, Sept. 29 to see if he wanted to accompany me to WWE Live at the Alerus Center that night.

On our short drive there, I try to fill him in on the kind of show he would be getting. To be fair, it’s a lot to absorb, and I don’t blame him for failing to be prepared as we took our seats in the “WWE-ified” Alerus.

Like most of the uninitiated, he has a hard time grasping why so many people would want to watch contests that are fixed. There’s no chance, no “real competition,” only spectacle and flash. I hope that by the end of the night, he’ll understand that that is what makes it all so wonderful. As an occasional watcher of the WWE, I’ve never been to an actual event myself. The ring looks much smaller than I expected.

The first match is between Finn Balor and Bray Wyatt. Balor’s entrance is fairly bland, but Wyatt has an impressive lead up. The room goes dark and audience members start waving their cell phone lights. Slowly, a looming figure holding a lantern makes his way into the ring.

I’ve been trying to explain to Torin that most wrestlers have schticks – a backstory and a character- but he doesn’t seem to fully understand the implications of this this until Wyatt’s showing. I quickly fill him in on the basics of Wyatt; he is an evil Southern cult leader. This is all one really needs to know.

The match isn’t all that exciting. Balor defeats the bad guy, and we move quickly on to the next spectacle: the cruiserweights division. This is the first fight of the evening to introduce the idea of defending a belt. Enzo Amore (an annoying character, but very popular with the 12-year-old boy sitting in front of us) walks out with the Raw Cruiserweights Champion belt.

Before the match, Amore explains in detail how his opponent will not be able to take the belt due to a technicality. Apparently, Neville “laid hands on him” in a small drama that unfolded a few days earlier, and is therefore disqualified from winning the belt tonight. The match proceeds anyway, with Neville putting up a better fight and ultimately winning, but unable to receive the belt.

It is at this moment that I realize something I probably should have realized earlier. Any belt matches (which were all but two of the night) would have to be won by the defenders. The WWE is not going to change any storylines in a show in Grand Forks that is not being broadcasted anywhere. (At the Alerus Center, wrestling is even more fake than usual.)

I decide not to share this revelation with Torin. He seems to be getting more enthusiastic, and I don’t want to ruin it. The next fight is a three-way “Triple Threat” tag team match, ostensibly for the title of “Raw Tag-Team Champions.” Current champions Dean Ambrose and Seth Rollins must defend their title against their main rivals, Cesaro and Sheamus, and two very forgettable wrestlers who apparently have ties with The Miz.

At first, Torin is confused by the new format. “There’s like six people in there and they’re all muscle-bound white dudes!” he complains, unable to keep track of what is happening. As the fight wears on, however, he becomes more engaged.

“Cross the floor! Touch his hand!” he suddenly shouts from beside me. Seth Rollins seems incapacitated, dragging his body across the ring, desperately trying to tag in Ambrose after a devastating blow.

“Torin, are you actually getting into this?” I ask.

“No,” he says simply, never taking his eyes off the ring.

During the next fight, which is particularly forgettable, I begin talking about how I wish that there was more time being spent on the mic. My favorite part of wrestling is the oratory craft of it – the bizarre, fantastic speeches that the wrestlers must give before, during and/or after matches about their prowess. Torin doesn’t quite understand how important this component is, so I point out that the Rock’s excellent old promos are why he was able to transcend his wrestling fame.

Torin doesn’t know, of course, of the Rock’s origins, but is pleasantly surprised. “Oh – I would totally watch the Rock do this!” he exclaims. I nod in agreement; he’s starting to get it. He’s equally delighted a few minutes later when he learns where John Cena comes from.

The second half of the show is vastly improved from the first; they know how to keep their audience interested. The five-way women’s match is frenetic, flashy and entertaining, and Torin gets to see his first truly great promo when the Miz gets on the mic.

“Is he trying to inspire boos or applause? I don’t know what to give him!” Torin said.

The final match, between Bran Strowman and Roman Reigns, is actually imbued with excitement due to the fact that there is no belt on the line, and therefore, anyone can win. Torin is confused, though, by the excited announcement by the master of ceremonies that this is a Last Man Standing match and that there are no longer any rules. “But I didn’t understand the rules in the first place. How does this change the game?” he asks.

After an entertaining bout that featured the breaking of two tables and a metal staircase to the face, Reigns wins. Torin admits that he was “genuinely excited by the table.”

People begin to file out of the center, and as we wait by the car, blocked in by exiting traffic, we meet Gary Kosmatka, a North Dakota native who has been following wrestling “longer than you been alive.”

Kosmatka reports that he’s traveled as far as Fargo and Minneapolis to watch wrestling, and that they used to have local wrestling shows in Grafton, but no longer. He says that he enjoyed the show tonight, but laments the fact that “years ago, it was more realistic in a way. Now, it’s not as vicious.”

Although he breaks the fourth wall by talking about wrestling’s realism, Kosmatka still says that he “would’ve said Bayley would have won the women’s championship,” genuinely surprised that the belt defender continued to keep the title. I’m taken aback by the comment, assuming that a seasoned fan would have come to the realization long ago that small time shows like the one in Grand Forks don’t get to affect overarching WWE storylines.

It’s hard to tell though, with wrestling fans. I think fondly of the little boy who had been sitting in front of me that night, excitedly giving his father play-by-play coverage of the event over the phone.

“The self-deceit is interesting,” Torin comments as we finally drive away. Any of the magic he felt in those final moments of the show has dissipated, replaced by the old cynicism.