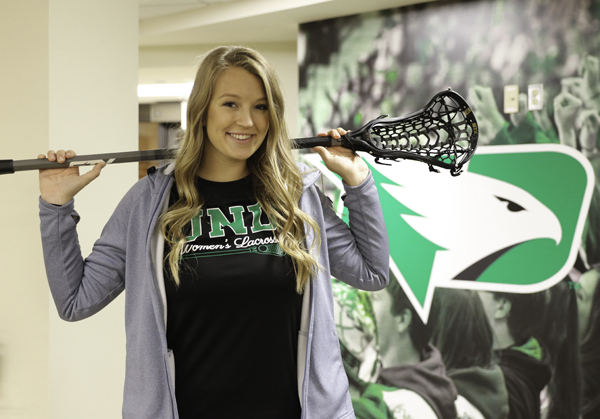 Maddy Floysand, a sophomore pre-med student, has played lacrosse at UND since her freshman year.

One of the newest sports to come on the scene under the University of North Dakota club sports umbrella is women’s lacrosse.

Floysand is a sophomore pre-med major at UND and an active member of the UND women’s lacrosse team. She has been with the team since she came to UND as a freshman.

“Even though my major requires a lot of school work, with this lacrosse team being club I’m able to get the time I need to spend working with my schoolwork, while still being able to play the sport I love,” Floysand said.

They look to begin their season in 2017-2018 after becoming a club sport at UND only three years ago. Since their humble beginnings, the program has been continuing with positive momentum toward success.

“We are definitely getting better every year,” Floysand said. “More girls have experience every year and we’re get further and further into playoffs with each year.”

Now, coming into the fourth year of the program, the women’s lacrosse team is looking to add even more success to their program, and hopefully even more players.

“Last year we didn’t have a lot of substitutes, which led to some of our girls playing the entire game,” Floysand said. “We’re hoping to get new recruits and be able to continue the growth of this club here at UND.”

With lacrosse, there are different positions to suit every type of athlete. Even if you are new to the sport there is always a spot that will fit your abilities.

“Last year we had a goalie that hadn’t ever played before, and she became the backbone of our team by the end of the year. She really stepped up for us and we hope we can get more newcomers like that,” Floysand said.

If you have experience and played in high school or even when you were younger, the women’s lacrosse team encourages you to come try it out at the club collegiate level as well.

“I know when I came here, I had heard about the team and was unsure of doing it, but I found after joining, it was worth it. It’s such a relaxed fun environment and having the passion to play, made it even more fun,” Floysand said.

“We would love to see more people join this year, no matter who they are or their skill level. This sport is so much fun and I love it. I know a lot of others will too if they give it the chance that the rest of us did,” Floysand said.

They haven’t quite yet set a meeting date for the beginning of the year for informational purposes. They hope girls who are interested in playing will reach out to the women’s lacrosse twitter account. You can find their account @undwomenslax.

“Come to the meetings, try practicing a few times, it’s really easy to pick up being the perfect crossover sport,” Floysand said. “It’ll be incredibly easy for someone to get ahold of the fundamentals really quickly, even if it doesn’t start out the best on the first attempt.”

Nick Erickson is a staff writer for Dakota Student. He can be reached at [email protected]