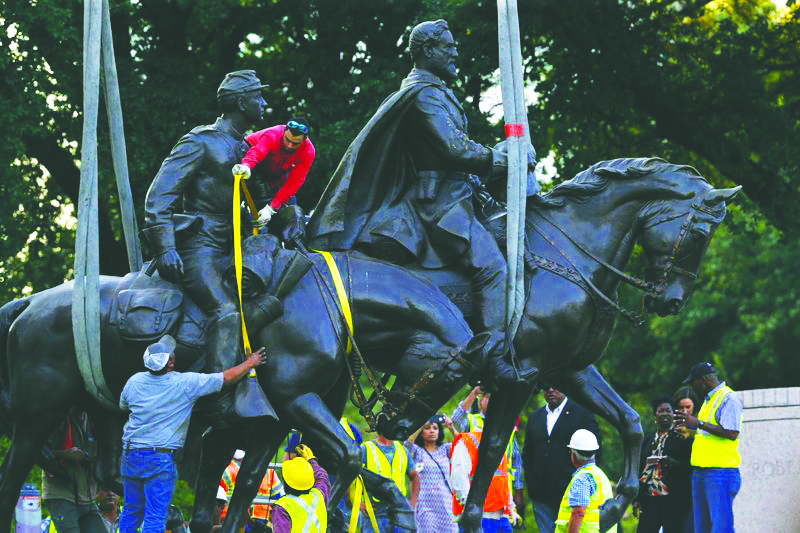 Workers prepare for the removal of a statue of Robert E. Lee at a public park in Dallas, Thursday, Sept. 14, 2017. In an unannounced move, a large crane was brought through the city by a police escort to Lee Park, where it lifted the large statue from its pedestal late Thursday afternoon. (Nathan Hunsinger/The Dallas Morning News via AP)

The Civil War wasn’t merely about slavery, but preserving the United States as a country. The idea and possibility of taking confederate statues down was never a problem before. But why has it become an issue now? Why do people all of a sudden have a problem with history?

What happened, happened. There is no way of changing the past, but we can learn from our mistakes and focus on the future. Someone being offended shouldn’t be good enough reason to take something down. The people of the United States need to remember the real meaning and symbolism of the statues and memorials before taking down or destroying them. At the very least, these statutes should remain in museums if they are taken down.

Confederate statues should be seen as a reminder of the progress we’ve made while honoring the strategic power of Confederate leaders. Taking down monuments will not change what happened. Removing offensive monuments will not make people forget, ignore or change what happened. If we need to do this, then maybe we need to take down the Washington Monument – George Washington had slaves. Then there is the Jefferson home at Monticello – Thomas Jefferson had slaves.

My point is there’s no need to take any statues down. Jefferson and Washington will be remembered for their contributions to the formation of the United States. While the legacy of Robert E. Lee is not as pristine as other U.S. historical greats, he is arguably one of the most clever military minds in our country’s history. He won many battles for the Confederacy. Had the Confederate states won the Civil War, there’s no doubt in my mind Lee would be remembered fondly today.

One could also consider the artistry of a monument. Art is a form of expression which is protected by our constitution. With that logic, removing Confederate statues is a violation of the artist’s freedom of speech. Therefore, it would be ill-mannered to remove a statue that an artist has worked diligently on.

Our history is not pretty. There are many times in our past where we’ve done something wrong. The monuments and statues that are put up during that time period don’t refer to those bad times, but rather to the remembrance of the people who fought and suffered through the tragedies. If we were to take down every statue that had to do with a dark time in the United States, what would we have left to remember? Nothing. We would be destroying a lot of history. For good to exist, bad is necessary. The United States has been on both sides.

The most important thing to remember is the real meanings of those dark times and how we’ve moved forward. The United States has stayed united in times of hardships. Is taking down the monuments really worth the risk of possibly dividing the United States? History is history, and the past is the past. It is better to learn from mistakes and concern ourselves with the present day conflicts our society faces which we still have the power to affect.

Nick Sallen is a staff writer for Dakota Student. He can be reached at [email protected]