Story of the spud

Taking a look at the Potato Bowl's past 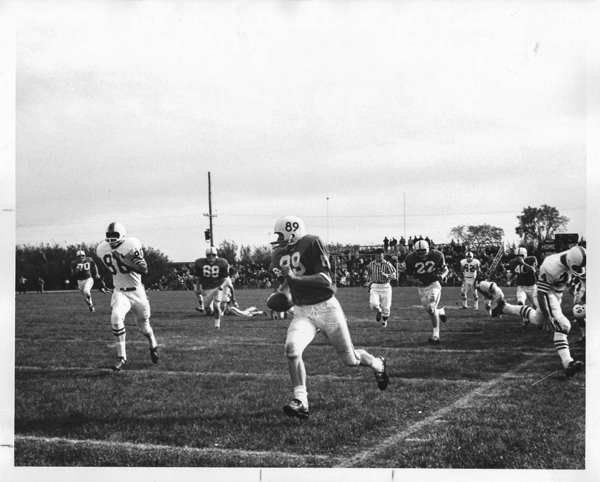 An action photograph of UND Football player, Bill Predovich #89, at the UND vs Idaho State game on September 24, 1966. Elwyn B. Robinson Department of Special Collections

For decades now, the city of Grand Forks and the University of North Dakota have joined together to partake in what could be considered UND’s second homecoming. Potato Bowl USA is an annual home game for UND Football and has been a city to since the inaugural Potato Bowl back in 1966.

According to Pete Haga, legend has it that the Potato Bowl was the result of a rivalry between two of the largest potato-growing regions in the nation: Idaho and the Red River Valley.

With Idaho and UND set to hash it out on the field, the opposing coaches joined forces with the Potato Growers Association to create Potato Bowl USA, the game to decide who had the better team and the better spuds.

UND Director of Athletics Brian Faison has seen the city and the team benefit from the development of this tradition.

“We want to do this as much as we can, because we get so much support from the community,” Faison said. “So if we can drive some revenue into the market, we sure want to do that. Win-win-win.”

Faison said the growth of the Potato Bowl has been exponential, and he credits the success of the football team for that.

“It’s amazing how it has grown,” Faison said. “It’s actually, right now, as big a game or bigger in terms of fan attendance than homecoming. Which is really unusual.”

Attendance isn’t the only aspect of game day getting a boost. Faison said purchasable tailgating spots in the Alerus Center parking lot sold out faster than ever this year, meaning the Grand Forks community is quicker to invest in the UND football experience.

Hadley Purdy is a UND student and has attended three, going on four, Potato Bowls. She said this home game is unlike any other on the schedule.

“It’s almost like a week-long event leading up to the game,” Purdy said. “Each day that progresses in the week, you get more excited to be at the Potato Bowl game.”

This week-long spud festival includes the Kem Shrine Potato Bowl Parade and the annual Simplot French Fry Feed, which are just some of the ways the community and the university converge.

“It helps the city because it really provides a mechanism for ownership and affiliation with the university,” Haga said. “One of many ways.”

Haga said this game has become a huge part of the community’s tradition. “It centers, of course around the UND football game, which is the key thing, but the community has really grabbed onto it,” Haga said. “A lot of it is simply because of the rich heritage with the potatoes and the potato industry.”

The strong connection between the team, school and city has been the driving force in the development of this tradition.

“My favorite part of the week is seeing the community and the university come together,” Purdey said. “There’s just this really large sense of support and comradery. That’s really cool.”

The Fighting Hawks will be playing Missouri State in the The 52nd Annual Potato Bowl USA this Saturday at the Alerus Center. Kickoff is at 4 p.m., with Tailgate Village opening at 1:30 p.m.

Jacob Notermann is a staff writer for The Dakota Student. He can be reached at  [email protected]