Pride of the North

Marching into the season with new uniforms 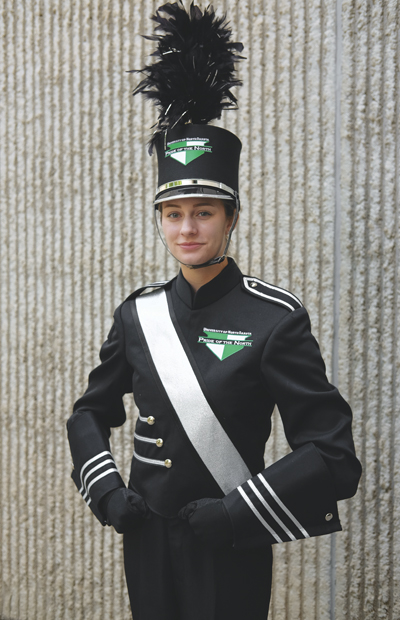 The Pride of the North marching band is considered to be a standard ensemble in the music department. Comprised of non-majors and music majors, the group comes together to provide entertainment for the community and support for athletes during the games.

Founded in 1998 by Rob Brooks, the group has been marching in the Potato Bowl for the past 20 years. The first appearance of the Pride of the North was in the back of a potato trailer with only 14 band members. The next year, they marched with 40 members and have since marched every parade.

There was exciting news at the end of the last fall semester regarding new uniforms. The alumni association was allowing the band to do a fundraiser to purchase new uniforms. While the old uniforms were well loved, the green tops blended into the turf at the Alerus Center, causing a blurry show for the audience.

The new uniforms are black with a single zip, with the Pride of the North logo on the left shoulder, a silver sash going across the right hip, gauntlets (gloves) to cover the sleeves and the traditional shako hat. Removing the green allows the Pride of the North to produce a more visually pleasing performance to the audience while on the football field.

Alex Stroth is a student who has been with the Pride Marching band for three years.

“The uniforms are something that we have been waiting for for a long time,” Stroth said. “Having the gauntlets will be very helpful in keeping the sleeves out of the way while drumming and while also playing instruments. Having the pride logo on the chest of the uniforms and on front of the shakos will help dignify us more when compared to other marching bands.”

When many people hear of marching band, they often think of people marching in parades, playing their instruments and getting the crowds excited for the home team. What many people do not know is marching band is an intense physical activity.

Before the first week of classes, the Pride of the North has a one week marching band camp where students come to train for the physical aspect of marching band and learn the music. Playing an instrument while moving across the field in a straight line is incredibly difficult. The Pride marching band spends four and a half hours a week practicing for events, and on the days when there are games, the Pride band will spend about 12 hours practicing and performing.

What is the importance of marching bands here at UND? There are many reasons why the band is here. One reason is to give students from across all majors a chance to experience an organization that welcomes everyone, whether or not they’ve marched before. Students from all majors and disciplines are present in the marching band. There will be many members of the Pride marching band who will make their marching debut at the 2017 Potato Bowl Parade.

For students who have been active in the Pride of the North, this is a group that has taught them so much more than just social interaction. Kelsey Wiens is a four-year Pride member in the flute section. She has seen Pride as more than just an ensemble.

“Being a part of Pride of the North is more than just performing and marching in parades,” Wiens said. “It takes dedication, discipline, and teamwork to make everything work. While marching, if you are not in line with the person next to you, you make sure you are working with your section to make everything as visually appealing as well as aurally pleasing. Having the dedication to learn new material while working with others is something that you cannot find anywhere else.”

Why should students join the Pride of the North marching band? Not only will you have the opportunity to attend sporting events and encourage the Fighting Hawks home team, you will also have the chance to meet students from majors that you may not have the chance to interact with. Watch for the band in the Potato Bowl Parade and cheer them on during the opening show at the football game.

Devon Abler is the Opinion Editor for The Dakota Student. He can be reached at [email protected]