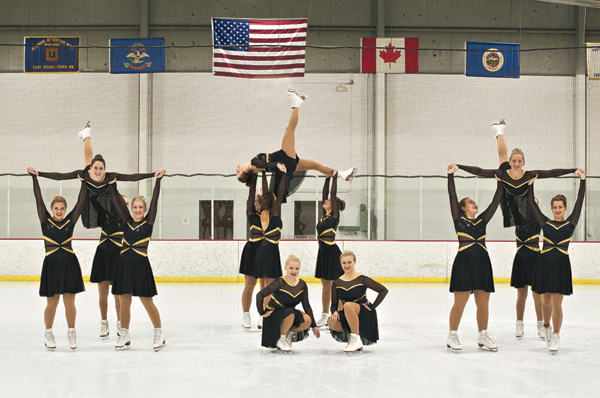 In 2012, when then-undergrad Mallory Olson found out that UND didn’t have a synchronized skating team, she decided to start her own. Borne from her lifelong passion of figure skating was Team North Dakota, which remains the state’s only collegiate synchronized figure skating team. Olson is now the head coach and director of Team North Dakota, as well as a private instructor and group instructor for two other programs.

Though Team N.D. came from humble beginnings as a non-competitive club with only eight members, they have now advanced into a competitive collegiate team that travels across the country to compete.

“Originally, I wanted it to be a school organization that existed only to get the word out that we would be competitive in the future,” Olson said. “But after realizing that it would be hard to pull figure and synchronized skaters, we decided to open it up to a larger group of people.”

Olson’s passion for the sport and her team is motivated by the happiness that Team N.D. brings to the skaters who, without the organization, would have been far less involved with synchronized skating.

“They’re great skaters, but if they want to stay in the area, there’s nothing really for them to do related to synchronized skating,” Olson said. “So, Team N.D. is an outlet for them.” 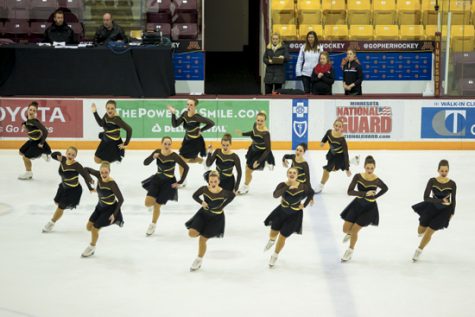 Along with allowing skaters to continue their hobby and advance their skills, Olson says that Team N.D. has given the skaters a competitive edge in other aspects of their lives, including their career advancement.

“I actually spoke with a past skater this past summer and who got into UND’s physician’s assistant program,” Olson said. “She thought it really benefitted her to talk about how she was part of a team like Team North Dakota.”

She explained that the work and commitment that skaters put into the team result in progress and, eventually, rewards.

Olson believes that this mindset is what trains her skaters to become champions on the rink and off.

“You don’t necessarily need synchronized skating experience,” Olson said. But she advised that applicants should have, at some point, been a figure skater and must be a full-time college student to participate.

The tryouts will be an opportunity for applicants to meet Mallory and the current team members, as well as showcase their individual skills and their ability to work with a synchronized team.

“We do drills that have us going down the ice,” she said. “We will also connect and do things as a team. Working on team elements is a big part of synchronized skating.”

Upon making the team, skaters will attend two to three early-morning and late-evening classes. These times were purposely chosen to not conflict with the academic class schedules of the full-time students.

Though her team has gone far, she is more than happy because the club still simply exists.

“The big reason why I started it was because I didn’t have an opportunity to skate in college when I came to UND,” she said. “I didn’t really want that for anybody else. So I felt like if there was a way to provide that opportunity to skaters, why not do it?”

Since advancing from non-competitive, to open-collegiate in 2014 and eventually collegiate in 2016, Team N.D. has continued to grow and attract skaters who, after starting college, may have otherwise just let their passion slip away.

“Figure skating was a huge part of my life and I knew that there have got to be others like that out there,” she said. “To have this continuous opportunity for those girls would be awesome.”

For more information on the tryouts or Team N.D. or visit their website at www.ndsynchro.com

Stephanie Hollman is a staff writer for The Dakota Student. She can be reached at [email protected]