Tearing down the legacy 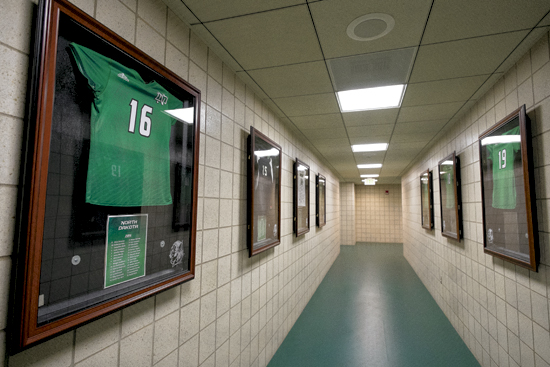 Using frames that once contained women's hockey jerseys, a display for the UND soccer program is now in place on the ice level of the Ralph Engelstad Arena. Nick Nelson/ Dakota Student

The University of North Dakota is a staple in the hockey community, recognized for producing high-class hockey players into the National Hockey League and the Olympics. So, when the news came out about the cutting of women’s hockey at UND, there was a shock around the community as a whole.

Whether it was from NHL players, or from fans of hockey as a whole, there was the same astonishment for everyone including former WCHA opponents such as Minnesota State Mankato senior women’s hockey player, Lindsey Coleman.

“I feel like there is a different feeling amongst playing in the WCHA since the cut because it is not feel like a complete league without North Dakota,” Coleman said. “UND has always had such a great program with great players and great facilities. It’s a different feeling know we will not be making the trip out to Grand Forks this year. It was sad, disappointing, and shocking to see UND cut the women’s hockey team.”

This has been a recurring reaction amongst people in the hockey community.

A question thought by many, especially in the WCHA, after a prominent hockey school like UND cut their women’s hockey team, was, are other women’s hockey programs going to be cut in the future?

The hope amongst many is this will not continue to happen, but recognizes the possibility due to financial issues within a university. Charly Dahlquist, former Fighting Hawk, recently moved to Ohio State and her teammate Lauren Boyle realized this harsh truth and financial strains of some teams across college hockey.

“The cutting of the UND Women’s Hockey team opens a window of opportunity for other programs to find their way out of our league,” Boyle said. “I don’t believe that everyone is just going to jump right to cutting their women’s hockey teams, but I do think that if money is an issue within a university’s athletic department, that women’s hockey is an expensive sport that may be a simple solution to financial strain. This is an unfortunate reality to our sport, and I hope that people don’t use this as an excuse to cut more programs in our league.”

Since the cut to women’s hockey, there have been many changes to their old home. The Ralph Engelstad Arena. The main change being, UND Women’s Soccer is now using the locker room that once belonged to the women’s hockey team. This change has sparked some different opinions amongst athletes at UND.

The Ralph is known for hockey. To put a non-hockey team, that has not had the best winning record in recent years, immediately in the old women’s locker room was not taken well by some.

Once again, timing was not on the side of UND. To fill a locker room months after the cut of a major sport, was seen a poor move by UND. If UND had waited until the following year, when all the dust had settled with budget cuts, it’s possible that people may have had a more understanding reaction.

Other changes to The Ralph included the removal of women’s hockey pictures leading up to the locker room. These have been replaced with women’s soccer pictures due to The Ralph being their new home.

“I think the removal of the photos by the locker room is disrespectful and almost degrading to the hockey program,” Dahlquist said. “Yes, I do understand that a new team is in the Ralph now, and that is the main focus, but that did not mean you needed to act like the women’s hockey team never existed at UND. Our program was a top 10 ranked team every year, and the university got rid of any trace of us the week after we got cut.”

When asked about the new locker room and the controversy that has followed, UND women’s soccer sophomore Karleen Yapello had a lot to say.

Even though there have been changes to The Ralph. The Women’s Hockey team is not forgotten. A shrine commemorating the former program has been created on the main concourse to commemorate 14 years of North Dakota Hockey tradition.

“The concourse of the Ralph has always been covered with photos and history being made of the Men’s team, which is awesome to see,” Kolstad said. “With that being said, I believe that the shrine on the concourse given to the women’s team after the cutting of the program should have been there long before our program was through.”

While the moves made in the past year at UND, when it comes to women’s hockey, have not been what many wanted. The legacy of the program will always live on at UND, and the memories made in the 14-year history will be forever remembered at the Ralph.

Kyle Kinnamon is the sports editor for Dakota Student. He can be reached at [email protected]