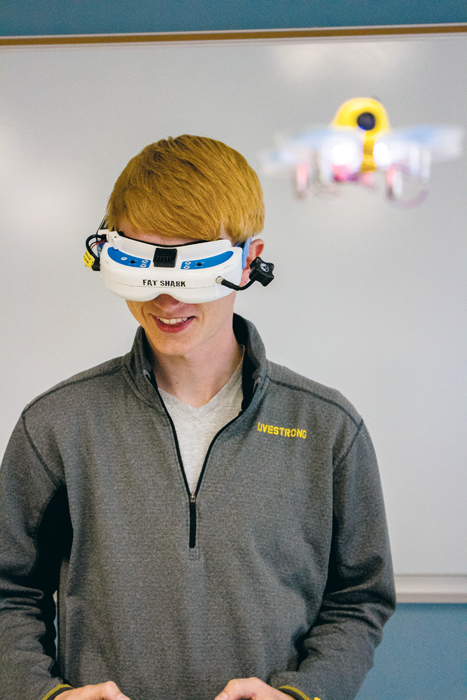 At this time last year, The UND UAS/RC Club was virtually defunct. Their name stands for Unmanned Aerial Systems and Radio Controlled Aircraft, and to students like Eric DeGray, it seemed odd that UND Aerospace didn’t have a more active UAS community.

“It had been inactive for about a year and a half,” newly elected President of the club Jordan Krueger said, “it was going downhill (…) and a UAS school without a UAS club just seemed really stupid.”

A commercial aviation major and small UAS hobbyist, DeGray was initially excited to join the club “to recruit more racers” for drone races that he was competing in. However, when he discovered the state of the club, he knew he wanted to take action. “There really wasn’t anything left,” he said.

DeGray was eventually able to send out an announcement for a club meeting in November through Kim Higgs, an academic advisor for the aerospace program. According to DeGray, about 25 people showed up to this initial meeting, and for the remainder of the school year, a dedicated core has been working to revitalize the club.

“It kind of took off for us,” DeGray said, “It actually worked out a lot better than I thought it would.” In the last semester, the club has been holding multiple meetings and “build sessions” per week.

In addition to practicing the art of flying RC aircraft and generally enjoying the company of fellow enthusiasts, club members have been working hard at making UAS more accessible to a larger community. “My goal with the club was to establish a small UAS presence at this school. We pride ourselves on (our UAS) program, but nobody knows how to fly UAS,” DeGray said.

The club uses their limited resources and build sessions to create $40 kits to sell to students so they can make and fly their own RC aircraft. They have also teamed up with AESOP (the Aviation Education Student Outreach Program) to educate children at the Riverside Christian School about UAS. DeGray says this is a step toward their eventual goal of creating a youth summer program.

The newly-resurrected club is still facing its fair share of challenges. Their biggest one is that they are no longer technically a club as the previous administration let their paperwork lapse. Krueger will be spending the summer preparing to meet with the Student Government Association to reinstate their status as a club.

“Not being an official club has proved problematic for us,” DeGray said, citing such inconveniences as not being able to receive school funding for a trip to a UAS event at Purdue, and the fact that they cannot open a club bank account at the University Federal Credit Union to manage their profits from a recent successful fundraiser.

The first step in the process will be to revise the constitution, an important document for any organization seeking club status. “Newer language could be used,” said Krueger. In light of the Federal Aviation Administration’s stricter rules concerning smaller UAS operations, he also stressed that they “need to establish safety measures in the constitution that (they can) all abide by.”

The name is also up for debate. “RC” might be taken out of the official moniker.

“We want to take it away from the ‘hobby’ and make it more professional,”DeGray said.

Some members purportedly would like the term “drone” to be in the name. This, however, might go against one of the club’s public relations goals, which is, Krueger claims, “making people know (UAS) is not just military drones blowing up people.”

Whatever name they will be going by in the fall, the UAS club is full of enthusiastic members ready to engage with their passion and, as Krueger puts it, “Make UAS great again.” Though de facto founder DeGray will be reducing his student status to part-time and stepping down from his position as President, he said he passes the torch to Krueger with no regrets.

Diane Newberry is news editor for The Dakota Student. She can be reached at [email protected]