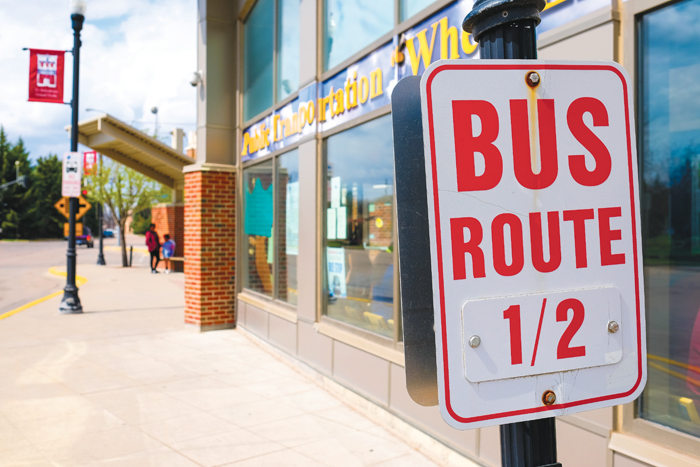 The Metro Transit Center in downtown Grand Forks, N.D. is the main hub for the Cities Area Transit (CAT) bus service, which travels throughout the community.

“This update is standard procedure for public transit operators who received federal funding, such as CAT. “The TDP update process is a great opportunity for CAT to evaluate its current operation,” said Wade Kline, a TDP coordinator.

“The timing for the TDP update was perfect, as it aligned with a general sentiment from CAT to start to evaluate a new route structure to match changing trends in the community, and to take better advantage of system strengths.”

One of the biggest route changes in the plan is the expansion of the night routes. Currently, there is one night bus which loops around the city every hour. The new night bus plan has four routes which travel in a similar pattern as the day bus routes. This change will improve the frequency of service for night riders and make traveling on the night routes faster.

“The proposed route structure should improve connectivity across the community by streamlining routes between East Grand Forks and Grand Forks for popular destinations such as Altru and Columbia Mall,” Kline said. “Improvements are anticipated through better north-south access to the UND campus along both 42nd Street and Columbia Road. Route alignments should be improved with route ‘interlining’ to improve connectivity between downtown and the growing area along and south of 32nd Avenue South.  Several of the proposed routes are centered on the Grand Cities Mall as an emerging transfer node of the CAT system.”

Other changes to the routes include making transportation from UND to the Columbia Mall easier for students. Previously, if you lived near S. Washington Ave, you would have to transfer to a second bus route in order to get to UND.

“This streamlining of routes is great for me, a student living far from campus, because I transfer from route 5 to route 4/6 every time I need to get to campus and it takes at least 30 minutes to get there. With this new plan, I expect to be able to cut my travel time in half,” Kline said.

In order to improve integration and connectivity, the TDP aims to increase service hours. One proposed change would be to have Sunday service and expand the route service area in East Grand Forks. CAT would also like to train employees on customer service to minimize passenger complaints.

“Overall, most riders understand that the CAT system needs to work for the whole community,” Kline said, “The intent of these proposed changes is to assist with addressing the overall mobility needs of CAT users and the general public,” The largest degree of disappointment comes when riders realize that Sunday service or service to the industrial area not fundable at this time. However, both routes remain as future potential options as funding becomes available.”

Nothing in the plan is final yet. The TDP may undergo a few changes before June, when CAT will submit their plan to City Council.

“The first step in the process is implementing the proposed route structure,” Kline said. “It appears this will be possible in the first quarter of 2018 to match new funding from the State of Minnesota provided to East Grand Forks.”

Nick Sallen is a copy editor for The Dakota Student. She can be reached at [email protected]