UND Football on the rise 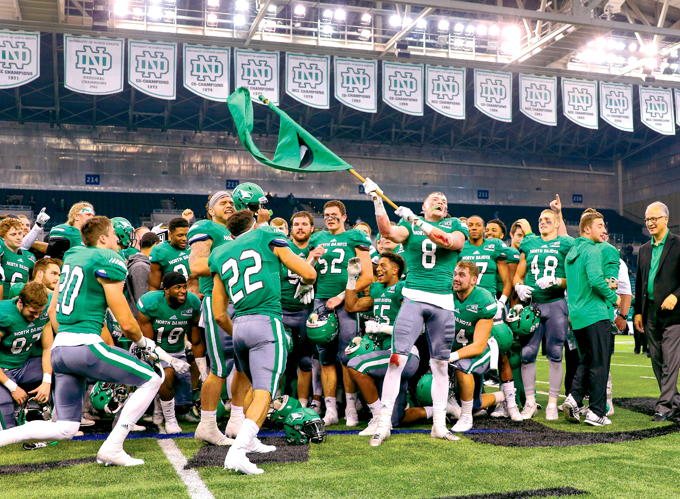 In 2017, the Fighting Hawks will not only be looking to defend their Big Sky conference title, but also trying to improve on their 2016 season.

After dropping their first two games on a blocked punt returned for a touchdown against Stony Brook, and losing by one point against Bowling Green after going for the two-point conversion, the Hawks rattled off nine victories in a row.

The playoffs ended for the Hawks in heartbreaking fashion. After starting the game hot against the Richmond Spiders, they had a 24-7 lead heading into halftime. Everything looked to be pointing towards a matchup of the Big Sky co-champions with Eastern Washington.

A touchdown here, a blocked punt there and Richmond was back in the game. They got the ball back from the Hawks with three minutes remaining and proceeded to drive the ball down to the UND two-yard line with three second remaining. They kicked the game-winning field goal as time expired.

Although the loss was stunning, and heartbreaking, the Hawks will look to learn and build off the loss.

“I think we can learn from this, we’ve had our post-season meetings now individually and our guys are motivated to move forward.” head coach Bubba Schweigert said.

Although UND may have lost the playoff game, it will still help with recruiting, along with the boisterous crowds the team has had this season.

“It helps you, the exposure,” Schweigert said. “I think if you look at the crowds we had this year, the atmosphere in the Alerus Center when you have young men visit with their families, that helps you. All those things give you momentum in recruiting.”

In 2017, the Hawks want to not only repeat as conference champions, but make a deep run into the playoffs. Schweigert talked about his coaching staff’s plans for the future.

“We’re getting a few more pats on the back for not advancing in the playoffs and that’s not good for us,” Schweigert said. “We have a bigger vision for our program.”

The focus for the coaching staff this offseason will be to improve both the offensive line, and the defensive secondary.

The offensive line was very solid for the Hawks for most of the season, but Schweigert wants to see more consistency from them.

While the secondary tied for first in interceptions in the FCS last season with 20, they still have some work to do. They had issues at times giving up big passing plays to the opposition.

“Our back row gave up too many explosive plays,” Schweigert said. “When you stop the run like we do, teams will play against us the way they have a lot this season and protect the passer with as many people as possible and look for one-on-one matchups.”

The Hawk’s first game at the Alerus Center next season is Sept. 9, against Missouri State of the Missouri Valley Conference.

UND will host Montana State, Northern Colorado and Sacramento State as well as a matchup against 2016 co-conference champion Eastern Washington on the final week of the season.

Adam Gunderman is the staff writer for Dakota Student. He can be reached at [email protected]