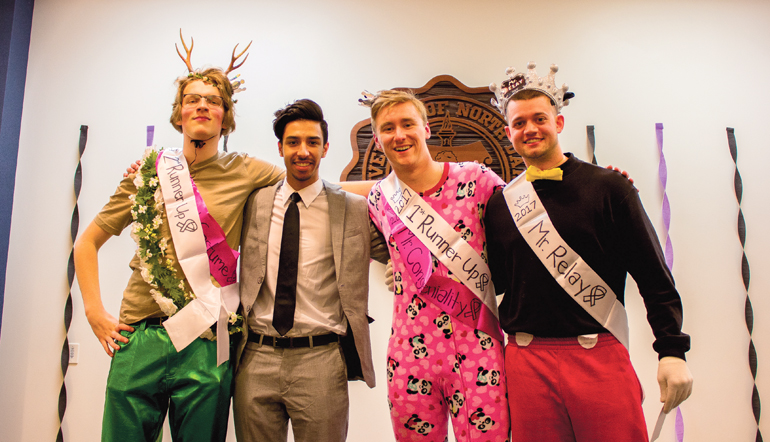 Mr. Relay contestants pose after the competition on Sunday, April 23, 2017 at the Memorial Union Ballroom.

An event for a good cause was held in the Memorial Union Ballroom last Sunday evening, April 23. Students had the opportunity to attend and donate to the campus Relay for Life, an organization that looks to help fight and prevent cancer, during their Mr. Relay: Male Pageant Contest.

The night began with introductions of each of the contestant, as well as the judges. Each were able to share very touching stories as to how they became involved in the fight against cancer.

One of the judges, Maria Schmidt, described her experience battling breast cancer as she was still attending classes. Able to complete her classes in a timely manner, Schmidt had said her fellow classmates and professors were very supportive throughout her fight.

In addition pageant winner, Brock Taylor was able to share his motivation as to why he continues to take part in events to raise cancer awareness.

“I lost my aunt through ovarian cancer when I was nine years old,” Taylor said. “Having gone through that, this event really hit home for me. She was also my godmother, so when I did lose her, I got more involved in creating awareness for cancer.”

Members of the Honors Service Learning group were there to keep the night lighthearted and fun. Mariah Jorda, a student on campus, was one of the members in the group previously mentioned that was able to assist in organizing the event.

“Our whole goal was to raise a little bit of money, but also to raise interest in Relay for Life,” Jorda said. “We’re planning a big event for next year, so we wanted to get some interest, and to get some new committee members. In addition, we also really wanted to remind people that we are a force on campus and to help raise awareness for our organization.”

UND’s Relay for Life partnered with the Honors Service Learning group, and according to Jorda, they’ve been helpful with a lot of their publicity. They’ve also been helpful as an advisory on campus.

“Our actual advisor for the organization is, as of now, in California,” Jorda said. “So it’s been really difficult coordinating with them long distance. It’s nice to be able to work with someone within the area.”

As in a traditional pageant, a runway, talent show and interview portion was required of the contestants in order to win the grand prize. The big prize of the night was a year’s worth of free Pizza Ranch.

During the talent portion, contestants showcased their creative and unique abilities. Some participants  presented their talents through music performances, while others did stand-up and comedic skits.

Pageant contestants came to the event with their own costume design. Costumes featured were: a Mickey Mouse outfit, a pink onesie accompanied with a blue shield, a grey suit with a black tie and lastly, a ‘brother nature’ themed costume.

Even though some contestants didn’t win the grand prize, everyone knew they were there for something more important. Tom Longar, male pageants second runner-up and a current student, knew the win was giving his support to fight with the cause against cancer.

“Events like this really bring in a lot of people together for a good cause,” Longar said. “It reaches out to students who might have been affected by cancer in the past. It helps bring awareness and it lets students, especially younger ones who might not know, get involved themselves.”

Anyone who has any question in regards to UND’s Relay for Life or upcoming events involving them, can find them through their homepage located on Facebook.