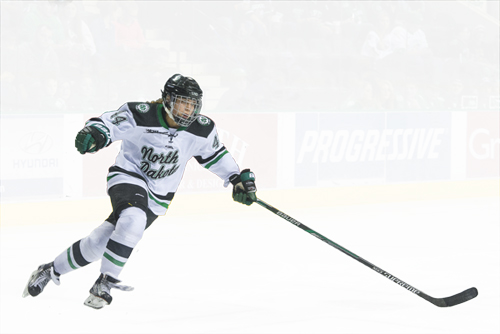 Rebekah Kolstad is one of the first UND women's hockey players to transfer to another school (MSU-Mankato) following the announcement of the program's elimination on March 29, 2017.

After the unexpected cut of the University of North Dakota women’s hockey team, the first Fighting Hawk has found a new home.

In case you haven’t heard, the University Of North Dakota is facing budget cuts that had to be made with athletics on the chopping block. They had been since last spring with the baseball team being cut, now two more programs have joined the list; The swimming and diving squads as well as the UND women’s hockey program.

“We knew budget cuts were coming, but we thought there was no chance it would be us,” former forward Rebekah Kolstad said, who was practicing when news came out. “Especially at North Dakota. You just don’t cut hockey at a hockey school. There aren’t really words to describe it.”

Luckily for Kolstad she has found a new home as a Minnesota State Maverick this coming season.

“Today was super exciting,” Kolstad said after signing with Minnesota State on April 17th, “knowing I’m going to continue my hockey career and get my education. Coming back home makes it more exciting.”

Kolstad is no stranger to the Mankato area. Before playing for UND, she was a standout at Mankato East.

The Mankato East class of 2015 graduate saw plenty of ice time tallying 233 points in six seasons while also receiving four All-Big Nine team selections and an All-State back in 2014.

After a rough freshman year, the forward was able to find her footing more as she scored six goals while also notching five assists.

“My freshman year, I was pretty lost, not knowing what was going on,” Kolstad said. “But this year, I was a lot more comfortable and had a lot more fun. I definitely thought I improved.”

We are excited to have Rebekah at Minnesota State and in our hockey program,” said MSU head coach John Harrington. “She will bring experience, skill and competitiveness to our team and our game.”

Kolstad is the first player to transfer to a different program since the budget cuts and it will be interesting to see where other go from here.

Last season, there were a total of 17 players who were juniors or lower. 16 of those players who will be able to play immediately this fall will continue to look for a new place to play.

This won’t be a first for the Kolstad family either. Her older brother Isaac Kolstad spent two years at MSU after transferring from NDSU.

“I’m following in his footsteps,” Kolstad said. “He was successful (at MSU), and that gives me a lot of hope, too.”

Despite the cuts, UND President Mark Kennedy informed women hockey supporters that they can save the program. Just rally up $60 million dollars.

It will be interesting to see who goes where before the start of the 2017-18 or those who chose to stay at the same school that gave them their pink slip.

With the cuts of the women’s hockey team and men’s and women’s swimming in diving, UND will be down to 17 sports in the fall. 14 is the minimum for FCS schools like UND.