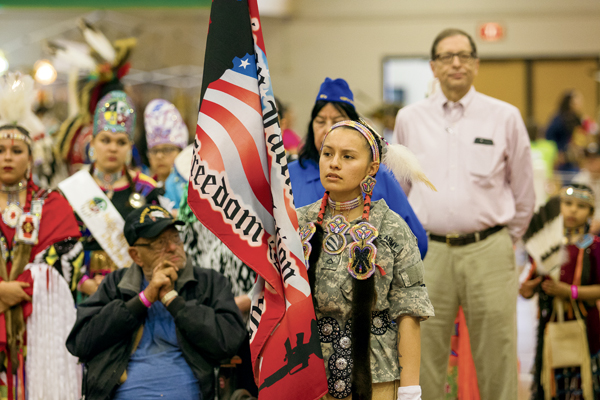 Time Out Week ended with the Wacipi, which ran Friday, Saturday and Sunday at the Hyslop Sports Center.

The 47th Annual Time Out Wacipi was held this last weekend at the Hyslop Center. What will surely be one of the biggest (if not the biggest) cultural celebrations of the year at UND, the powwow brought hundreds of people from different tribes across the nation to join together in a colorful, rhythmic festival. The Wacipi was presented by the University of North Dakota Indian Association.

The event comes at the end of the UND Indian Student Association’s Time Out Week, which features presentations, panels and events on different cultural topics. The Wacipi is open to the public every year to help educate the Grand Forks community about many Native American cultures.

The Hyslop Center was absolutely packed with people over the weekend. The walls were lined with stands set up by people selling crafts, clothing, beaded jewelry and artwork of all kinds. Concessions were provided, including fry bread tacos (which are delicious).

There were tons of participants in the dancing contest walking around in traditional regalia. The clothing of the dancers was colorful; every participant’s clothing had a different color scheme. They were adorned with feathers and jewelry. Many dancing outfits were fitted with bells or chimes, which almost made the dancers seem like instruments themselves. They contributed to the rhythm of the music with every step.

The dancing and singing contests are central events at the Wacipi. There are many participants grouped together by age. The Golden Age group, 60 years and older; seniors, 35-59; junior adults, 18-34; teenagers, 13-17; juniors, six to 12; and “tiny tots,” up to five years old.

With so many participants, there is dancing and singing going on much of the time. The winners of each category get a significant payout. Adults can win $800, teens $300, but the grand prize, $3000 for first place in the singing contest.

To kick off the festivities each day of the Wacipi, contest participants enter the arena in a traditional Grand Entry. This is a procession of all of the dancers led by an Honor Guard. The Honor Guard carries tribal government flags as well as the U.S. flag. The Grand Entry honors tribal nations and families, veterans and dancers. Drums and singing commence as the dancers follow the Honor Guard around the floor. The procession is preceded by a prayer given by an elder designated by the powwow committee.

A large traditional community meal was prepared and served Saturday night, April 22. Many visitors travel great distances to come and participate in the Wacipi. I heard of some people coming from as far as Oklahoma and Arizona. To thank the participants for their attendance, the powwow committee provides a meal. This was open to the public as well as the participants.

The UND Indian Association took time over the weekend to honor a special guest. Since 1978, Leigh Jeanotte has served as the Director of the Native American Programs, now known as American Indian Student Services. Over his many years in administration, Jeanotte has worked with an astounding amount of organizations impacting the higher education of American Indian students.

The North Dakota Indian Education Association (NDIEA) and the Higher Education Resource Organization for Students (HEROS) are just a couple of them. On Saturday April 22, Jeanotte received a special gift and song to thank and honor him for his dedicated service these many years.

With the weekend drawn to a close, dances done and songs sung, Grand Forks’ biggest cultural festival is over. Undoubtedly, people are already getting excited for next year. I know I am. It will be fun to see what great things the UND Indian Association can accomplish at next year’s Time Out Week and Wacipi.

Ben Godfrey is a staff writer for The Dakota Student. He can be reached at [email protected]