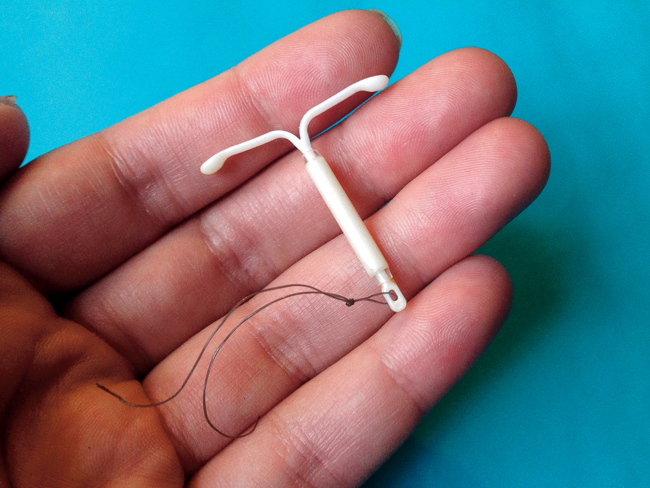 The Mirena intrauterine device (IUD) is one of many forms of long-lasting birth control Student Health Services offers to students at UND.

Recently one of the April “Toilet Talk” health informational flyers stated that “According to UND Student Health (SHS), the most common form of contraception used by females at UND is the Intrauterine Device (IUD).” Rosy Dub, RN-BC, and Sarah Gustafson, FNP-C, of SHS would like to correct this misleading statement.

The prescription birth control pill is still statistically the most used form of contraception by female students who utilize SHS. However, different forms of Long-Acting Reversible Contraception (LARCs) are becoming increasingly popular with UND’s student body, and for good reason.

Student Health offers two forms of LARCs: the IUD, inserted into the uterus, and Nexplanon, inserted into the arm. They started offering IUDs to students in August of 2015 because, as Gustafson explained, “they were starting to see a lot more interest for the IUD.”

When asked if the rate of LARC usage is likely to keep rising amongst students, Gustafson replied, “I think we will continue to see an increase. It will likely continue to mimic national trends.”

LARCs are endorsed by the American Academy of Pediatrics and the American College of Obstetrics and Gynecology for young women, although the latter did not endorse the IUD broadly for young women until 2012. Gustafson says this was because of concerns about the anatomy of women who had not yet given birth. Though IUD placement is different in every women, anatomical concerns unique to women who have never given birth are no longer considered a factor.

Women in college are a unique age group in terms of birth control. Though many are sexually active, most do want children until after they have finished their education. “Longer acting forms of birth control are more attractive to this age group” says Dub. LARCs do not have to be taken daily, can last for several years and can be taken out at any time. The Nexplanon implant lasts for three years, as do two IUD options offered at SHS – Skyla and Kyleena. The Mirena IUD, also offered by SHS, lasts for 5 years.

LARCs are also a popular option with college-aged women because they do not have be taken on a regular basis. This is important for women who “do not have a set routine every day,” Dub explains. LARCs are rated as more effective for birth control than prescription pills not because of their medical efficacy, but because of the convenience of not having to think about contraception daily. “The pill is just as effective if you don’t miss any,” says Gustafson. However, “on average, females miss 4.2 birth control pills per month.”

According to Dub, implanting LARCs has become “an everyday thing” for SHS and “overall (they)have seen very good rates of continuation with these LARC options.” Of course, in addition to the pill and LARCs, they also offer injections, a patch and a ring for birth control. Providers and nurses also support and educate patients who choose abstinence. “It is important to meet the patient where they’re at,” says Gustafson. SHS also stresses that none of these options protect against sexually transmitted infections and recommend the use of condoms and safe-sex practices for STD prevention.