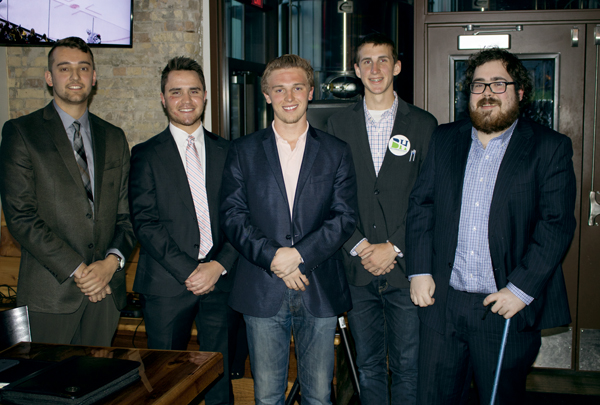 Campaigns for student body president are coming to an end, with the vote being held April 12. The candidates remain active, as they were able to get together for a forum Thursday night, April 6.

The forum was held at Rhombus Guys Brewery in downtown Grand Forks, starting at 6 p.m. and running to just after 8 p.m. The theme of the night was diversity and inclusion as well as women’s safety.

Roughly 20 people were in attendance to participate in the events. Unfortunately, presidential candidate John Bjorklund, was unable to attend the forum due to conflicting schedules with his drill training for the Army. Bjorklund’s vice presidential running mate Dave Owen was able to answer questions on his behalf.

“John is a military man,” Owen said. “So he has what is called drill. Every now and then, John has to go, for about a week, to drill and train, so he can protect us. He is a veteran, but he’s still a part of the Army. As a result, he has to go to drill in order to learn the skills he needs to protect our country. Drill just happened to be this week, so it’s rather unfortunate timing in terms of elections. But quite frankly, it’s irrelevant because his drill is more important than this, it’s keeping us all safe.”

With the assistance of university Academic Support/Cultural Diversity Tuition Waiver Advisor, Roy Roach, to assist in hosting the event, they began the forum with introductions from each of the candidates. Once introductions wrapped up, two questions were then presented to the candidates, to which they had to answer them individually.

The first question of the night was in relation to women’s safety on campus and how the candidate would go about properly attending to the matter. The second question was in regards to diversity and inclusion within the university.

Some verbal sparring ensued between Owen and presidential candidate Blake Andert, when Owen promoted their team’s plan to provide a properly functioning women’s center as well as a safehouse for victims of sexual assault. The cause of this divisiveness was not the idea, but rather a discrepancy in the quantity of fund they’re allowed to pull from.

When the questions were finally answered, the room was open for audience members to ask the candidates questions. People addressed their thoughts and concerns regarding the future of the university, to which each candidate was able to answer the questions with understanding and fluidity.

Afterwards, when the forum had finally finished up, all the candidates in attendance had a moment to reflect on the night. When asked about their expectations going into the forum and whether those expectations were met, they had this to say.

“Yeah, I was actually very pleased,” Bachmeier said. “We got actual students getting engaged and hearing their thoughts and opinions on what’s important to them. For me and Eric, that’s what we want to hear, we love to see passion and student leaders come up and say “hey, this is what I think is wrong with UND. How do you guys plan on fixing it?” Having a fruitful discussion while working together to try and get the university moving in the right direction. To give both Eric and I’s vision for the university, but also to take things back, so we can modify our vision to make it more inclusive for all voices.

“Being an effective leader is being an effective listener,” Hanson said. “What we’ve learned through our experience in Student Government is that it’s not our vision, it’s theirs. Today we got to hear the concerns as well as visions from a number of different people from all sorts of backgrounds. The best part about this event is we got to have these conversations.”

“I’m satisfied anytime any student wants to engage me,” Owen said. “My expectation tonight was that I would have a place to where students would be interested, and willing to engage and understand what goes on. You don’t come into these things expecting turnouts. You don’t come into these things expecting anything more or anything less than people to talk to you about real issues and to get real answers, and that’s what we accomplished tonight.”

“My expectations coming into the night were that there would be some hot button questions and pressing topics,” Andert said. “People wanted some real world answers. They didn’t want us blanking on answers that didn’t get to the nuts and bolts of the question. I think that’s what we had tonight. I think people asked some real questions that really affect students and that they want a legitimate answer to. I was happy to give the realest answers we could.”

“I think tonight was really a night where if students really wanted to have their questions answered, they could,” Hanson said. “And we were able to give them a down to earth, honest answer. What we expected coming into this, is that we would be getting some pretty pressing topics and pressing questions about some pretty heated situation going on around campus. We were prepared to answer those questions to the best of our ability and I think we did just that.”