Bettman says no to Olympics 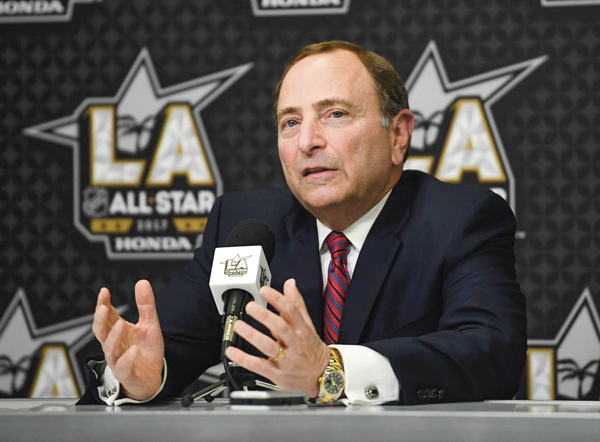 This past week, after speculation of what the choice would be, the National Hockey League has decided its’ players will not represent their countries at the 2018 Winter Olympics in PyeongChang, South Korea.

NHL Commissioner Gary Bettman has stated the main reason the owners would not prefer to have players go play in the Olympics due to timing. The break in schedule would happen in a window of opportunity for the league with football ending and baseball yet to begin.

This will be the first time the NHL has not participated in the Winter Olympics since 1998, with a total of 706 players attending, an average of 141 per season.

As the owners found this a success the players were none too happy about this decision.

“It’s brutal,” Carolina Hurricanes defenseman Justin Faulk said, who played for the United States in 2014. “I don’t think there’s any reason we shouldn’t be going.”

Washington Capitals forward Alex Ovechkin, has stated despite the NHL’s non-Olympic decision he will still play for Russia, even if it means leaving the NHL.

“I haven’t changed my mind, and I won’t,” Ovechkin said, “I’m pretty sure everything is going to be fine. Next year’s schedule is not out there yet.”

Many players sited how hypocritical the NHL is about players getting injured, having a more difficult schedule, and also expanding their fan base.

“Knowing that the league wants to get into the Asian markets, it maybe would have been smart to go over there and show the best players,” Vancouver Canucks forward Henrik Sedin said.

Sedin is referring to how the NHL has announced NHL exhibition games to be played in China this coming preseason.

With the outlash from players question the greedy move of NHL owners, there’s a potential of players going overseas next season to be eligible for the Olympics. The possibility of Captials Captain Alex Ovechkin heading back to Russia and play alongside Pavel Datysuk and Ilya Kovalchuk on SKA St. Petersburg is put a grim future in the hands of the Captials.

In 2014, a total of 241 players of the 300 selected for the the Olympics were a member of an NHL franchise. Stand out teams included Canada and the US with 25 players each, Sweden with 24, 15 Russians, 15 from the Czech Republic, and 14 from Finland to name the top countries.

With now a lack of NHL players, the US Hockey team should look to sending players that they would normally send to World Juniors. The tournament showcases the best young players in the world for each country giving a glimpse into the future. Now after the decision to not let NHL players participate, the future is now for these guys.

Before all this happened, Gary Bettman was already a villain to the fans. To some he ruined the Winter Classic having all these outdoor games every year also featuring the same five teams playing in the Classic. Now to add to his resume is contradicting the global expansion of the top hockey league in the world by not allowing the best players in the world represent their country at the Olympics in Korea in 2018 as well as potentially China in 2022.

The decision is robbing the fans of their favorite tradition. Every four years Americans get together to support their country. Wild fans and Blackhawks fans cheer together in hopes of USA gold. If the games are early in the day, you set an alarm to get up to watch that game. The saying has always been “For club and country.” With this decision it should now be “for club and maybe your country if it’s a financial and marketing gain for club and league.”

Now if you’ve ever watched the Stanley Cup finals, you know the drill. The team wins the Cup, they all go crazy, they bring out the Stanley, Bettman is introduced and the fans will boo him so loud that you can’t even hear him. Now one thing is for sure is that if this decision stands, you’ll never hear a louder chorus of boos and jeers in your life.